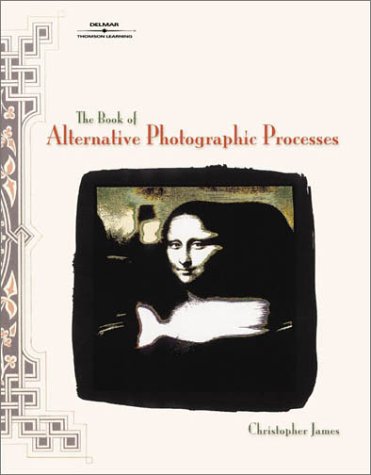 The Book of Alternative Photographic Processes
by Christopher James
Publisher's Description
Amazon.com Review
Pssst, wanna make a weird photograph? How about a moody blue cyanotype or a Kallitype? Or maybe a ziatype, anthotype, or Ambrotype? Or perhaps you'd just like to know more about image transfer processes or how to make a pinhole camera. Imagine knowing a really cool guy who casually tells you lots of valuable stuff about the history and science of photography while you're working in his experimental darkroom, and you've got the essence of the unusual and delightful Book of Alternative Photographic Processes. Christopher James, a photographer and former Harvard University professor, leads you carefully through the chemistry and use of materials for each process. He offers numerous ways to make negatives and prepare the printing paper, and he coaches you in understanding and accepting the enormously variable effects of each method. Seven useful appendices deal with such topics as safety considerations and resources on the Web. Unlike the narrowly task-oriented approach of average how-to guide, this one points you to a much bigger world. Even the illustrations include a generous assortment of contemporary prints--among them James's own inventive images--as well as work by 19th- and early-20th-century photographers. They were the ones who pioneered most of the techniques that are now considered "alternative."

The fun of this book--even for someone unlikely ever to set foot in a darkroom--lies in the author's fascinating excursions into the wide world of knowledge, from the workings of 3-D to Charles Babbage's steam-driven punch-card systems. Equally compelling are the author's sense of humor and his utter lack of dogmatism. "In gum printing," he writes, "there are very few absolutely correct ways to do anything." --Cathy Curtis