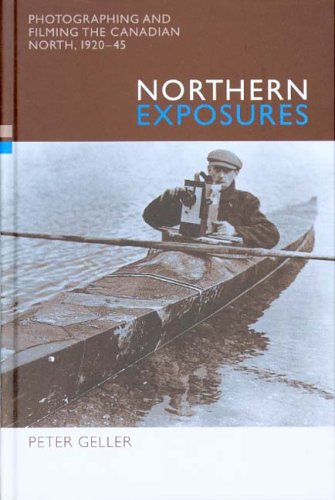 Northern Exposures: Photographing and Filming the Canadian North, 1920-45
by Peter L. Geller
Publisher's Description
To many, the North is a familiar but inaccessible place. Yet images of the region are within easy reach, in magazine racks, on our coffee tables, and on television, computer, and movie screens. In Northern Exposures, Peter Geller uncovers the history behind these popular conceptions of the Canadian North.

This book examines the photographic and film practice of the Canadian government, the Anglican Church of Canada, and the Hudson's Bay Company, the three major colonial institutions involved in the arctic and sub-arctic. In the first half of the twentieth century, visual representations of the region were widely circulated in official publications and presented in film shows and lantern slide lectures. Focusing on the work of prominent and prolific northern image-makers, including federal government special investigator Major Lachlan T. Burwash, first Bishop of the Arctic Archibald Lang Fleming, Beaver magazine editor and publicity expert Douglas McKay, and photographer-filmmaker-author Richard Finnie, this book engages in a contextual approach to 'reading' images, analyzing the interrelated aspects of production, circulation, and reception. Geller reveals the varied ways in which taking and displaying pictures of northern people and places contributed to the extension of control over the northern reaches of the Canadian nation.

Northern Exposures contributes to understandings of twentieth-century visual culture and the relationship between photographic ways of seeing and the expansion of colonial power, while raising important questions about the role of visual representation in understanding the past. It will be of interest to those concerned with Canadian and cultural history, Northern and Aboriginal studies, film and communication, art history, anthropology, and visual culture.
ISBN: 0774809272
Publisher: Univ of British Columbia Pr
Hardcover : 258 pages
Language: English