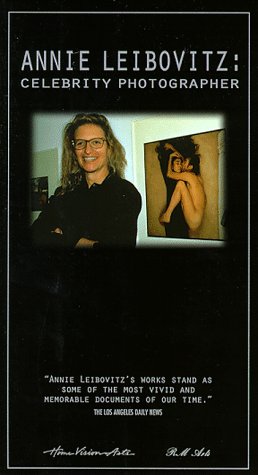 Annie Leibovitz: Celebrity Photographer [VHS]
Publisher's Description
Annie Leibovitz defined the style of celebrity portrait as caricature in the eighties working for Rolling Stone magazine. Her images of John Lennon and Yoko Ono, Bette Middler, and Arnold Schwartzanegger are part of the cannon of superstardom, humanizing stars through irony and play. This film helps get at the photographer behind the photographs. 51 minutes, VHS.
Amazon.com
Produced in 1993, this documentary depicts the development of Annie Leibovitz's career as a celebrity photographer, which she began after studying painting at the San Francisco Art Institute. Giving up a position as staff photographer at Rolling Stone magazine, she went on tour with Mick Jagger, and the photographs of this period reveal the anguish and torment of being a famous musician. This documentary also emphasizes the artistic and metaphorical nature of her portraits: a naked John Lennon embraces Yoko Ono dressed in black just hours before he was murdered; Clint Eastwood stands, but is bound up by a rope; Whoopee Goldberg is captured in a bathtub with legs, arms, and laughing face protruding out of soapy water. At times the photographer's inspiration comes from the person she is portraying, such as when Keith Haring paints a room and then paints his nude body to match the room. We see footage of how she pursues a shot for the cover of Vanity Fair, setting up her equipment in various locations to take provocative photographs of Demi Moore. A naked Demi Moore is painted with a blue suit, while Leibovitz anxiously waits to take the photographs. Produced for London Weekend Television, this 51-minute-long program contains nudity and explicit language, and also talks about the photographer's drug addiction. Nevertheless, through this gifted photographer's vision we get a sweeping view of the 1970s and '80s in the celebrity worlds of music, acting, and politics. --Anne Barclay Morgan
ISBN: 0780019148
Publisher: Home Vision Arts
VHS Tape Language: English