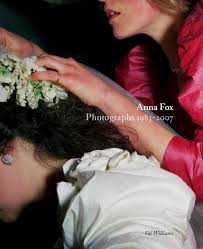 This new Photoworks publication offers the first comprehensive survey of the work to date of British photographer Anna Fox. Fox began practicing in the early 1980s, emerging as one of the most exciting colour documentarists at a time when photographic and cultural territories were being radically redrawn. Like many of the new colourists – young British photographers including Paul Reas, Paul Graham, Martin Parr and Paul Seawright – Fox was enchanted by the ‘ordinary’, and helped, as part of this group, to redefine documentary photography in Britain and Europe.

Anna Fox: Photographs 1983-2007 features representative selections from all of Fox’s major projects, spanning the entirety of her twenty-five year career. Beginning with her earliest projects, Basingstoke, Work Stations and Friendly Fire – each a critical exploration of the social make up and behaviour of Thatcher’s Britain in the 1980s – the book charts her progress through more personal, diaristic bodies of work including Hewitt Road, Coackroach Diary and My Mother’s Cupboards and My Father’s Words. Among her more recent projects, Country Girls and Pictures of Linda chronicle Fox’s relationship with the musicians Alison Goldfrapp and Linda Lunus through a series of intimate, playful and performative portraits, whilst Back to the Village looks to the social fabric and uniquely English customs witnessed by Fox around the her home village of Selborne in Hampshire.