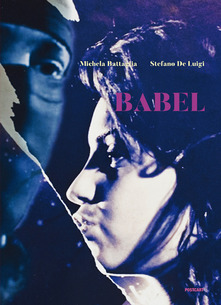 Images are one of the most universal, therefore effective, means of communication available. Since a photo can be interpreted in several ways, the same image can be addressed to a culturally, economically and socially heterogeneous audience.

A photographic image can also serve many different purposes: ornamental, didactic, journalistic, commercial, propagandistic. Images to scare, to impose an order, to win you over, to play with your mind, to conquer, to make you think, to sell, to excite, to persuade, to seduce, to shock.

Communication experts have always possessed the fullest awareness of such power, whether they have put their skills at the service of a brand, an object or an ideal.

Propaganda and advertising: economical or political interests. Strategies devised to play on a material need, or the need for an ideological affiliation. That take advantage of human fragilities, a state of isolation or simply a moral void.

Babel is a visual meditation on the use of photography through two of the most relevant examples in today’s capitalistic society: billboard advertising (as seen in the Paris underground) and Daesh propaganda imagery (as seen in Dabiq ). The project aims at combining two contrasting and apparently antithetic messages. It attempts a portrayal of the war which is being fought – by unprecedented means, on unprecedented fields – between a Western civilisation, which is losing its identity, and an alleged Caliphate, which proposes a whole array of radical moral values, by distorting one of the world’s most widespread religions.

Are we neutral spectators or oblivious hostages?

Babel was born from this question. From the impression that we are all like coloured pieces of chalk, writing a story that we are not conscious of. Powerless individuals caught up in a larger event despite ourselves, unmindful witnesses living through an epochal change.

Babel began in 2014 with a study that was initially intended as a homage to the Italian artist Mimmo Rotella. The background of the canvas is thus set.

The different images and layers of meaning captured by our eyes every day, sometimes subliminally, have been stratifying on this canvas little by little. Babel is a listening place for the notes resonating in our subconscious, for the sudden changes in our inner rhythms, where images remain fluid both in shape and content. The outcome is a digital manipulation, a meta-photography which gives birth to a hypothetical world living within the frame of the format that we have chosen. The dissection of confetti-like messages, which are ironically and provocatively compared.

A blending of the estrangement on which the master communicators base their campaigns.

Inserts and transparencies among the breaches through time and paper summarise the violence of our surrounding reality. As if almost trying to reflect and share our sense of loss and inner fragmentation.

In 2003 the American writer and intellectual Susan Sontag wrote that: “shock has become a leading stimulus of consumption and source of value.” Since then, the tolerance threshold has continued to rise. On one hand, we have become insensitive to, if not greedy for, a certain level of pornography of pain; a debasing representation of women; the lust for power. On the other hand there’s a promise of a sense of belonging, of redemption from solitude and anonymity.

In both cases, only appearances, degenerations.

Babel portrays our unconscious daily life, exposed to the constant abuse of a rainstorm of images that we cannot escape, from which there is no shelter.

We might as well stop running and open our eyes wide without fear.