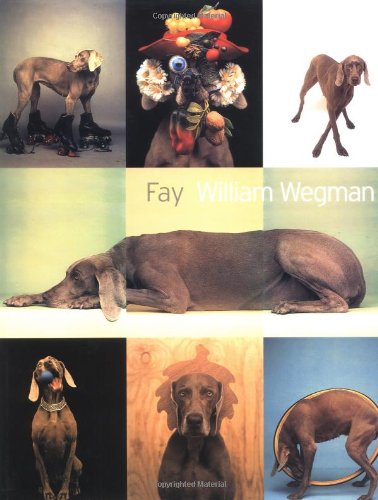 Fay
by William Wegman
Publisher's Description
A tribute to the late Fay Ray, progenitor of William Wegman's family of wacky weimaraners, Fay presents family pictures and video and film stills alongside the studio images that made her career and Wegman's alike.
Amazon.com Review
To a dog owner, each canine's personality is as uniquely defined as a human's. William Wegman knows this as well as or better than anyone. An artist best known for his photos of Weimaraner dogs, Wegman's work in the early '80s centered on his dog Man Ray. As Fay begins, Man Ray has died, and Wegman is resistant to the idea of replacing the irreplaceable Man Ray, named the Village Voice's "Man of the Year" in 1982.

When a fan of the artist meets him a few years later and invites him to choose a puppy from a litter of prize Weimaraners, Wegman is introduced to 6-month-old Fay, who immediately bewitches him with "the eyes of a jungle cat." Thus begins the story of Wegman's connection with the charming, shy, elegant Fay. Initially reluctant to feature her in his work, Wegman is content just to have a pet. But as he watches Fay's character develop into something quite different from Man Ray's, he finally decides to capture her personality in a photo shoot... then another... and another... until the two have developed a unique relationship on camera as well as off.

The book contains many striking photographs of Fay in anthropomorphic poses, as well as in several dresses and wigs--the result is sometimes humorous, sometimes seductive, but always hauntingly human and animal at the same time. Later photos feature Fay's pups Batty, Crooky, and Chundo as well. Pictures from a London Times photo spread feature the velvety dogs draped in diamond jewelry; photos from a Cinderella video incorporate the family into the cast, including Fay as the wicked stepmother and the fairy godmother; and stills from a Hardy Boys-type movie star (who else?) the Weimaraners.

Wegman and Fay's relationship is obviously an involved one--not just between a man and his dog, but an artist and his subject. And it is one that is lovingly captured in Fay's photos and story: here is a dog with a depth of personality equal to a human's, and a dignity and vulnerability expertly caught on film by one of our most original artists.--Kris Law