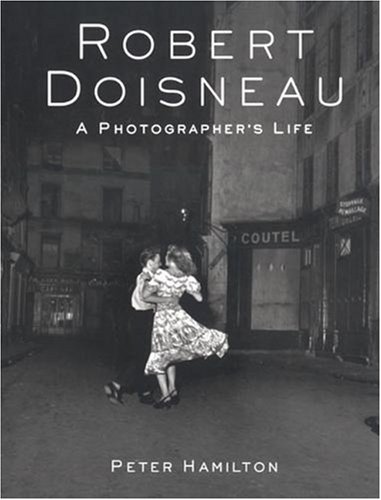 Robert Doisneau: A Photographer's Life
by Peter Hamilton
Publisher's Description
Perhaps most widely known for his romantic visions of Paris, Robert Doisneau is, in fact, a key figure in the history of documentary photography. He photographed every stratum of society, from derelicts to heads of state, recording the city in its move to modernism. With over five hundred images, many never published before, this is a rare look at the complete scope of Doisneau's work.
Amazon.com Review
Robert Doisneau: A Photographer's Life covers the renowned work of the French photographer famous for the 1950 picture Le Baiser de le Hotel de Ville. This frequently reproduced portrait of an attractive couple frozen in an embrace while Parisian city life whirls around them is an archetypal emblem of romance. It's pretty surprising to learn that Doisneau hired young actors for his entire kissing series; nevertheless, the moment rings undeniably true. Maybe it's his beginnings in advertising or his fashion work for Vogue that lend his images equal parts of real life and theater.

Doisneau (1912-1994) spent his lifetime recording life in France. With his combination of photojournalism and art, he captured nightclubs, the Parisian working-class suburbs, national monuments, weddings, and famous folk like Picasso. Some of the most riveting pictures are of resistance fighters in the midst of the Occupation--young men in civilian clothes, sportcoats and all, standing with guns behind homemade barricades. Accompanying the hundreds of pictures are in-depth chapters that discuss the different periods in Doisneau's life and work. From his childhood, through the war, and on to his fascination with the banlieues (suburbs), the well-researched text gives invaluable insight into this influential photographer's practice. --J.P.Cohen