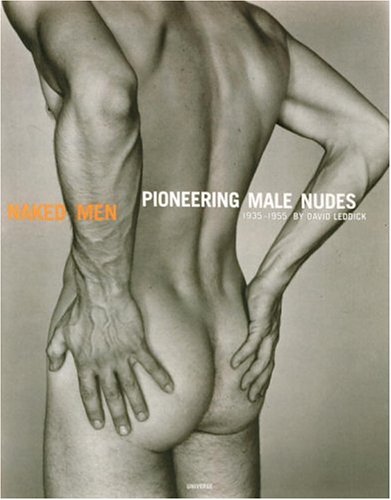 Naked Men : Pioneering Male Nudes 1935-1955
by David Leddick
Publisher's Description
"This extrodinary book documents a fascinating moment in the history of American culture--a period in the 1930s, 40s, and 50s that gave birth to new notiopns of male beauty and desire, and to a new type of male icon. Long before Stonewall and the gay pride movement, there was a small group of daring men--both photographers and the models who sat for them--who helped pave the way for male sexual liberation."--the publisher. This important anthology contains the work of George Platt Lynes and other fine photographers, but primarily concerns itself with the models themselves.
Amazon.com Review
The male nude has been a staple of art since the Greeks graced their public buildings with the glorified forms of gods and heroes. Renaissance artists didn't hesitate to display the male form, particularly in churches; the past 100 years of photography have seen a resurgence of the male nude. Nonetheless, until now there's been very little critical analysis of these nudes' homoerotic content. In his Lambda Award-winning Naked Men: Pioneering Male Nudes 1935-1955, David Leddick uses intensive research, interviews, and photographic representations to uncover sources and inspirations for the male nude through 20 years of contemporary art. Relying on the words and visual work of hundreds of artists, models, and writers (including George Platt Lynes, Paul Cadmus, Tennessee Williams, and Gore Vidal), Leddick conjures up the images, history, and social context of the mid-20th-century homoerotic nude. Filled with photos and reproductions, Naked Men shows us how gay sensibilities and gay culture have freed the male body from social restraints in both art and everyday life. Leddick's The Male Nude, while not strictly a companion volume, does similar work, detailing more than a century of male nudes. As with Naked Men, this book is lavishly and beautifully illustrated. Both are important documents of gay male history and culture. --Michael Bronski
ISBN: 0789300796
Publisher: Universe
Hardcover : 128 pages
Language: English