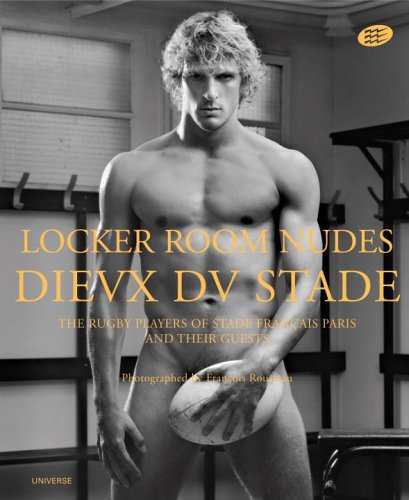 Locker Room Nudes / Dieux du Stade: The French National Rugby Team
by Francois Rousseau
Publisher's Description
This remarkable collection of candid nude photos of France’s national rugby team goes beneath the uniform to reveal what real jocks look like underneath it all. Each image taken by leading French photographer François Rousseau depicts the rugby player-alone or with teammates-undressing, lounging on the bench, showering. Locker Room Men is at once a celebration of athletes and the beauty of the male form as well as the fulfillment of the fantasy of going behind the scenes in a winning team’s locker room.

Sure to appeal to both gay men and straight women, these photos are unusual because the men are not models. They don’t work out just to look good-and look good they do-their bodies are sculpted by winning victories on the field. They aren’t made up, shaved, or prettified in any way. These are some of the world’s best rugby players-brawny, tough, competitive.

Since 1999, the French national rugby team has posed nude or semi-nude for an annual calendar. The purpose behind the calendar was to get wider “exposure” for rugby and the team. In 2004, François Rousseau was selected as photographer, and he successfully brought out the sensual beauty and sexiness inherent in the rugby players’ rough and tumble exterior. The calendar became a cult hit, and thus the book was born so that even more of these unparalleled images could be savored.

Whether or not rugby will become more popular in this country remains to be seen, but this book will certainly raise the game’s profile…
ISBN: 0789313073
Publisher: Universe
Hardcover : 152 pages
Language: English
Dimensions: 11.3 x 13.4 x 0.8 inches