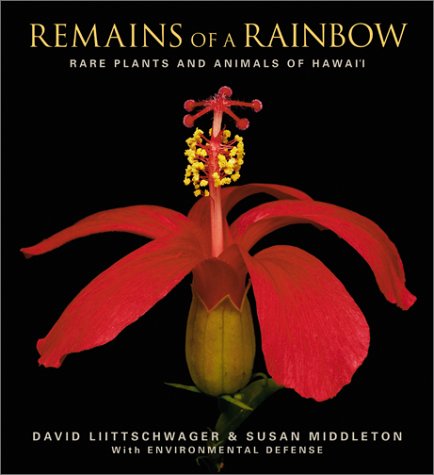 Award-winning photographers Liittschwager and Middleton, authors of the acclaimed Witness, have joined with Environmental Defense to present a spectacularly colorful portrait of the flora and fauna of Hawaii, one of the richest natural environments on Earth - and one of the most threatened. David Liittschwager and Susan Middleton have established a reputation as the foremost chroniclers of the endangered natural world, combining rigorous methodology with aesthetic genius. Their work has afforded a vivid presence to rare animals and plants, many of which are threatened with extinction. This groundbreaking portfolio of photographs encompasses the spectacular array of life-forms endemic to the Hawaiian Islands, including species either new to science or previously thought to be extinct. Working with internationally renowned field biologists, Liittschwager and Middleton have ventured into remote native habitats and uncovered intact ecosystems where plants and animals still live in healthy relation ship to one another. Their inaccessibility has helped protect these habitats from damage, even if it means that few people will ever have the opportunity to experience their richness and value directly.
Remains of a Rainbow combines Liittschwager's and Middleton's work with a powerful text (including a foreword by Pulitzer Prize-winning writer W S. Merwin) to tell a story of rare and wondrous creatures and habitats and the people devoted to their preservation.

DAVID LIITTSCHWAGER & SUSAN MIDDLETON,
both of whom studied and worked with Richard Avedon, have published two books, Witness and Here Today, on the subject of endangered North American plants and animals. Their work was the subject of an Emmy award-winning 1998 National Geographic television documentary, America's Endangered Species: Don't Say Goodbye. Liittschwager and Middleton have contributed to publications and scientific c works the world over and frequently lecture about their work. They each live in San Francisco, California.
ISBN: 0792264126
Publisher: National Geographic
Hardcover : 264 pages
Language: English