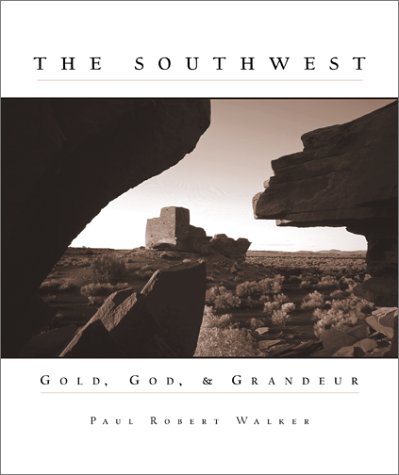 An irresistible visual experience that conveys the beauty and grandeur of the American Southwest and explores its dramatic history, from ancient settlements through the close of the 20th century. A land of stunning scenery and startling contrasts, of deep canyons, jagged mountains, and blistering deserts, the Southwest is the most colorful of regions, geographically and historically. It contains more national parks and monuments than any other area of the United States, a measure of its extraordinary beauty and the equally extraordinary efforts to preserve it.
Paul Robert Walker's ambitious chronological history gives readers a powerful sense of this unique region and the people-Indian, Hispanic, and Anglo-whose stories are etched into the earth. From Spanish invaders and their missions, the Santa Fe Trail, the Texas Revolution and the Mexican War, to Indian battles, gunslingers, land grabs, modern border issues, and nuclear research, Walker expertly assembles the story of the Southwest. In compelling prose, he evokes, as never before, the spirit of this corner of America from the ancient Pueblo and Hopi cultures to the New Southwest and the pressures the region faces from growth and scarcity of resources.
Illustrated with contemporary photographs of landscapes from New Mexico, Arizona, and California, to Utah, Colorado, and Texas by acclaimed photographer George H. H. Huey, The Southwest captures all the magic of this awe-inspiring land.

PAUL ROBERT WALKER
is the author of Trail of the Wild West: Rediscovering the American Frontier and several other books on the West including Great Figures of the Wild West; Big Men, Big Country; and Spiritual Leaders: A Portrait of 13 American Indian Shamans. He lives in Escondido, California.
GEORGE H. H. HUEY
is a travel and natural history photographer. His subjects range from western landscapes to natural details to international destinations. Huey's work has appeared in dozens of magazines, including Audubon, National Geographic, Outside, and Time. He lives in Prescott, Arizona.
ISBN: 0792264363
Publisher: National Geographic
Hardcover : 256 pages
Language: English