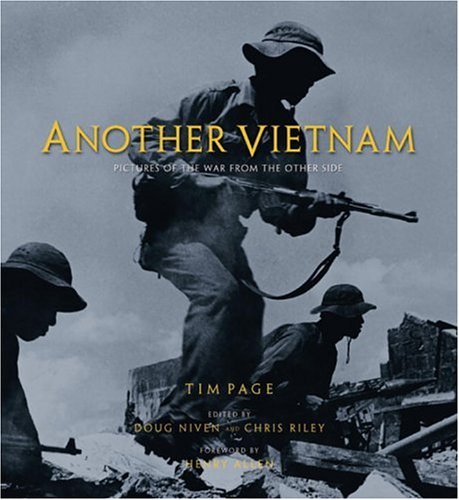 Another Vietnam: Pictures of the War from the Other Side
by Senator Max Cleland
Publisher's Description
Some thirty years after the end of the war, this important book asks the question, "What images formed the consciousness of the Vietnamese during the war?" To most Americans there is a set of gritty, black-and-white photographs that will forever symbolize the Vietnam war; surely, the Vietnamese have their own set of images, images that distill the conflict, that remind one of the horror of those years. Not only does Another Vietnam ask that question, it answers it in 240 pages of stunning photographs, such as the one at right in which an ethnic Cambodian soldier is carried to a makeshift operating room in a mangrove swamp. The book is organized according to various stages of the war and features biographies of numerous Vietnamese photographers.
Amazon.com Review
The groundbreaking publication Another Vietnam: Pictures of the War from the Other Side is an intense collection of images, many never seen before, from the cameras of North Vietnamese photographers. Each included photographer has a chapter highlighting his personal stories and captivating pictures. The stories are riveting and sometimes ironic: one revolutionary photographer falsified identification cards for Communist fighters, another traveled side by side with guerrillas, while another barely escaped a bombing campaign only to be forever haunted by the loss of his film and equipment.

With almost no resources, a serious lack of film, and outdated equipment, these committed photographers used will and determination in order to record history. From film processed under a night sky with homemade chemicals to making one roll of film last for years, each individual tale is a testament to the power of perseverance. Some of the pictures are haunting (a devastated landscape with the intense flare of napalm, an emergency surgery in a mangrove swamp), while others capture a seemingly staged Communist resolve (smiling soldiers with little children, classic hero poses shot from below). This book offers an important pictorial viewpoint and fills in many gaps from the popular Western media coverage of the war. --J.P. Cohen