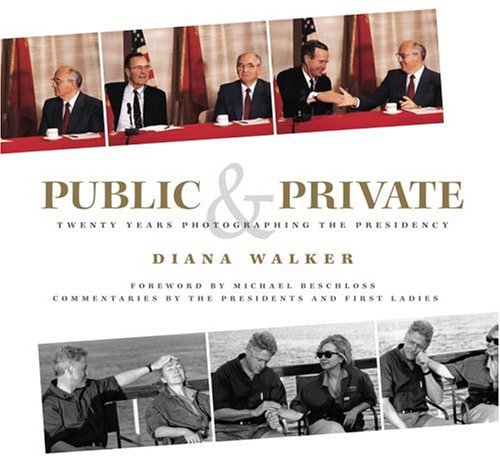 From Jimmy Carter to George W Bush, Time magazine White House photographer Diana Walker has had unique access to the Presidency for more than 20 years. Public & Private demonstrates, in intriguing detail, that she has used her access brilliantly.

The 130 photographs in Public & Private cover the public aspects of the office-from inaugurations and state dinners to cabinet meetings and press conferences-but also offer a rare, candid look at the private moments of the presidents, the first ladies, and the important figures in each administration. Missing no detail, Walker's expert lens has captured world leaders, Congressional insiders, the White House press corps, and family moments away from the spotlight, including the Bushes at Kennebunkport and Bill and Hillary Clinton on safari in Botswana. Humorous and heartbreaking, joyful and deadly serious, Walker's revealing images provide an unexpected understanding of the leaders we think we know so well.

With a foreword by renowned presidential historian Michael Beschloss, memories and perspectives contributed by the photographs' subjects, and Walker's own anecdotes, Public & Private is a unique and important contribution to the record of America's highest office.