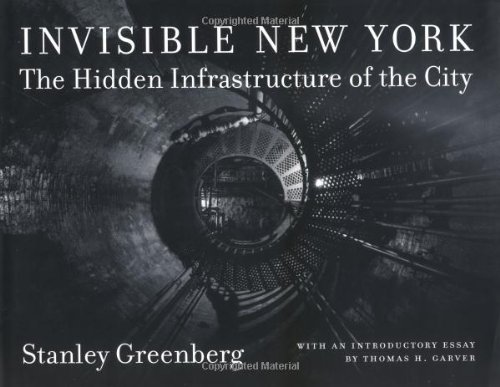 Invisible New York: The Hidden Infrastructure of the City (Creating the North American Landscape)
by Thomas Garver
Publisher's Description
In these gorgeous large format photographs, Stanley Greenberg lyrically exposes the mechanical underworld of New York City.
Amazon.com Review
There are many surprises among the 53 black-and-white photographs in Stanley Greenberg's hymn to the hum of the city that never sleeps. There is a revealing shot of the roof structure above the curved vault of Grand Central Station's night-sky ceiling that shows where those light bulbs are screwed in to form the delicate constellations commuters see every day. The anchorages of several city bridges--the chambers where the powerful cables that hold up the roadways are fastened down--are exposed to view, peeling paint, trash, and all. There is a gleaming shot of a working Con Edison turbine and a cluttered view of a derelict power station at Floyd Bennett Field, the city's first municipally owned commercial airport.

The pictures possess a certain sameness after the first 20 or so, but New York has been immortalized by many of history's very best photographers, so Greenberg has a tough act to follow. He has good company as he searches for a new angle, however, including Laura Rosen, whose Manhattan Shores is an equally quirky but richly satisfying and illuminating trek around the edges of the island, and Horst Hamann, whose New York Vertical has become an instant classic. Anyone who likes the idea of exploring the city's underpinnings instead of the subways, piers, or buildings themselves will love Invisible New York, which also contains an index in which Greenberg imparts fascinating information about each site. --Peggy Moorman