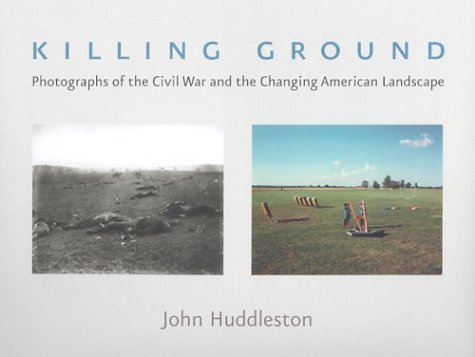 Contemporary photographs of 62 Civil War battlefield sites as they look today paired with historic black-and-white images of the same sites taken during the war.

In Killing Ground, John Huddleston embarks on a photographic odyssey through the modern-day landscape of the Civil War. He pairs historical images of the conflict from sixty-two battle sites across the nation- battlefield scenes, soldiers living and dead, prisoners of war, civilians, and slaves-with his own color photographs of the same locations a century and a half later, always taken at the same time of year, often at the same hour of the day. Sometimes Huddleston's lens reveals a department store or fastfood restaurant carelessly built on hallowed ground; other images depict overgrown fields or well-manicured parks. When contrasted with their mid-nineteenth-century counterparts, these indelible images challenge the meaning of place in American culture and the evolving legacy of the Civil War in our national memory.

'These haunting photographs of then and now offer a new and powerful perspective on the tragedies and triumphs-above all the human cost-of the Civil War. John Huddleston s photographs of selected spots on dozens of battlefields of that war, juxtaposed with photographs of soldiers killed or wounded there and other contemporary illustrations, make telling points in a unique manner. This book does more than prove the old adage that a picture is worth a thousand words; it tells the poignant story of the Civil War in a way that goes beyond words. '
-James McPherson

'Killing Ground situates us uncomfortably in a terrain where living memory has only recently completed its transformation into history. John Huddleston has photographed the scenes of this vast communal hurt, from the mightiest battles to obscure actions involving a few combatants; in every instance he asks the land itself to yield up what traces it may hold of the mortal issues contested there. Suburban intersection, brushy tangle, murky pool, well-tended battle park-all are joined by a commonality that Huddleston insists we not forget: Americans died here, killed by other Americans. '
-Frank Gohlke

John Huddleston is a professor of art at Middlebury College. His photographs have been widely exhibited and have appeared in Harper's, Preservation, Worth, and DoubleTake.
ISBN: 0801867738
Publisher: The Johns Hopkins University Press
Hardcover : 200 pages
Language: English
Dimensions: 11.2 x 9.2 x 0.9 inches