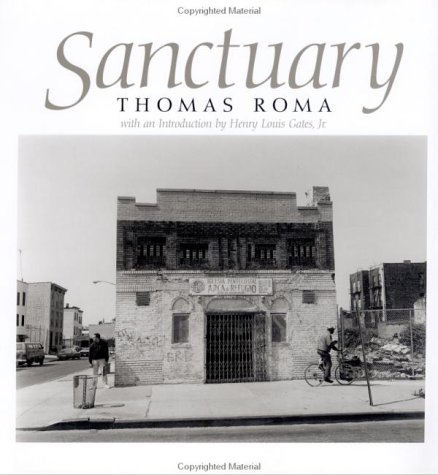 'Sanctuaryrefers to a place of worship and a state of mind- but it also refers to the most sacred part of a Christian church; the site where the altar is housed. Thomas Roma's photographs locate these most sacred parts of the community within the larger context of Brooklyn's landscape, charting the triumphant efforts ofgenerations to leave their mark, to make their way through the world of mammon and man, seeking solace within the city but far beyond it. They also reveal a persistent, irresistible determination to express spirituality within the often harsh landscape of the city, giving glory to God's resplendent being even through the often makeshift architecture of the storefront and the movie theater. '
-Henry Louis Gates, Jr.

In Sanctuary, acclaimed photographer Thomas Roma offers a compelling sequence of 52 black- and-white images that document the varieties of religious experience in Brooklyn as seen in the borough's sacred architecture. Juxtaposing pictures of grand Gothic and Romanesque churches photographed at a distance from backyards and alleys with more intimate views of smaller places of worship housed in converted storefronts and dilapidated brownstones, Roma subtly calls attention to issues of history and class, revealing how successive waves of immigrants have shaped Brooklyn's urbanscape and how the African-American and Hispanic communities living there now have worked to make these neighborhoods, culturally and spiritually, their own.

`Making a place for God, whether on the walls of doomed buildings or within steepled churches, is the subject of Thomas Roma's seemingly effortless study. He shows us that the place for God is anywhere within the tangled web of commerce, desire, domesticity and failure invisibly woven into our urban landscape. '
-Susan Kismaric, Curator of Photography, Museum ofModern Art

Thomas Roma is director of photography and an associate professor of art at Columbia University's School for the Arts. A two-time Guggenheim Fellow, Roma has exhibited his photographs in solo shows at the Museum of Modern Art and the International Center of Photography. His previous books include Higher Ground, Come Sunday and Enduring Justice.