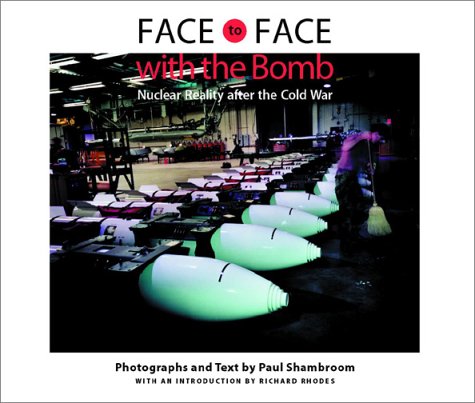 Face to Face with the Bomb: Nuclear Reality after the Cold War
by Richard Rhodes
Publisher's Description
'An important document of American in the nuclear age. Dominated by their striking formal qualities, these photographs reflect an aesthetic sensibility deeply responsive to the advent and infusion of new technologies in our daily surrounding. His images are powerful reminders of this reality with which we continue to live.'-Elizabeth Armstrong, Orange County Museum of Art 'Paul Shambroom's Face to Face with the Bomb richly deserves the much abused adjective unique.' With tenacity and chutzpah, Shambroom got okays from the Defense Department to visit nuclear-weapons sites and to photograph what he saw. No one else has done that; and in today's hypertense climate, it is unlikely to happen again. Shambroom neither praises nor condemns America's nuclear deterrent. His purpose was to demystify, to reveal the unseen, Openness, he reasoned, is the American way. The result is a one-of-a-king artifact of the Cold War.'-Mike Moore, Senior Editor, Bulletin of the Atomic Scientists More than ten years after the end of the Cold War, nuclear disarmament remains one of the most contentious issues in international relations. Potential instability in Russia and the former Soviet republics has heightened concerns about the control of nuclear stockpiles, and in the wake of September 11, the possibility that terrorists might obtain and use nuclear weapons has become frighteningly real. In Face to Face with the Bomb, photographer Paul Shambroom documents the nuclear reality we have created in a series of striking and eerily beautiful images that offer an unprecedented inside look at America's nuclear arsenal. Taken between 1992 and 2001, these photographs reveal in startling, intimate detail the United States's far-flung nuclear infrastructure. Shambroom's full-color prints depict both historic, Cold War-era weaponry shortly before it was mothballed and new warhead designs and missile defense prototypes that may be deployed well into the twenty-first century. Featuring an introductory essay by historian Richard Rhodes, this visually arresting and chillingly matter-of-fact volume provides a lasting document of one of the most uncertain periods in human history.
ISBN: 0801872022
Publisher: The Johns Hopkins University Press
Hardcover : 144 pages
Language: English