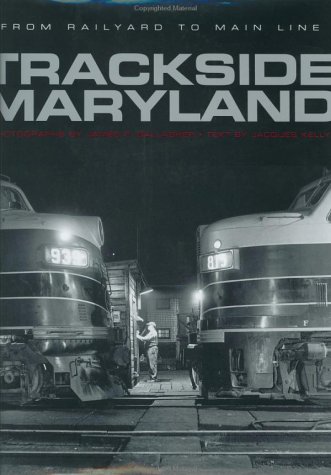 Trackside Maryland: From Railyard to Main Line
by James P. Gallagher
Publisher's Description
Trackside Maryland presents the magnificent black-and-white photography of James Gallagher with the commentary of Baltimore Sunpapers columnist Jacques Kelly to create a masterpiece of regional railroad history caught in the vise between waning steam and the sleek diesel technology of the 1950s.'-Courtney B. Wilson, Executive Director, B&O Railroad Museum In the 1950s, as railroads underwent major changes, some marginal lines stood on the brink of extinction. Steam locomotives grew scarcer by the month, as did rail passenger connections. With a keen eye for location and composition, James Gallagher in Trackside Maryland captures the drama and majesty of steam transportation in Maryland in its waning days, when passing trains left clouds of cinders and smoke behind them and the sound of steam whistles still echoed across the landscape-all these sights and sounds giving way to modern diesel locomotives. Here Jacques Kelly's evocative prose accompanies Gallagher's ever vigilant lens. We are transported back to the last years of steam railroading. 'Each of Jim's photographs tells a story and conveys mood, spirit, atmosphere, and character. The ground in his photographs rumbles. Some of the antique trains he photographed look as if they might rust and crumble before the end of their trip. Other photos impart a feeling of majesty and romance. and you don't have to be a train buff to appreciate them. Just step aboard and savor the results of Jim Gallagher's skill, luck, and persistence.'-Jacques Kelly, from the Introduction
ISBN: 0801873231
Publisher: The Johns Hopkins University Press
Hardcover : 224 pages
Language: English
Dimensions: 9.1 x 12.1 x 1 inches