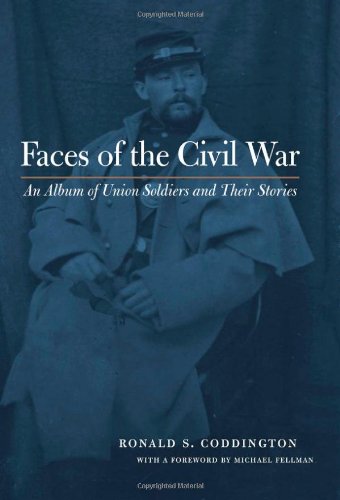 Faces of the Civil War: An Album of Union Soldiers and Their Stories
by Michael Fellman
Publisher's Description
Before going off to fight in the Civil War, many soldiers on both sides of the conflict posed for a carte de visite, or visiting card, to give to their families, friends, or sweethearts. Invented in 1854 by a French photographer, the carte de visite was a small photographic print roughly the size of a modern trading card. The format arrived in America on the eve of the Civil War, which fueled intense demand for the convenient and affordable keepsakes. Considerable numbers of these portrait cards of Civil War soldiers survive today, but the experiences-and often the names-of the individuals portrayed have been lost to time. A passionate collector of Civil War-era photography, Ronald S. Coddington became intrigued by these anonymous faces and began to research the history behind them in military records, pension files, and other public and personal documents. In Faces of the Civil War, Coddington presents 77 cartes de visite of Union soldiers from his collection and tells the stories of their lives during and after the war. The soldiers portrayed were wealthy and poor, educated and unschooled, native-born and immigrant, urban and rural. All were volunteers. Their personal stories reveal a tremendous diversity in their experience of war: many served with distinction, some were captured, some never saw combat while others saw little else. In compelling words and haunting pictures, Faces of the Civil War offers a unique perspective on the most dramatic and wrenching period in American history.
ISBN: 0801878764
Publisher: Johns Hopkins University Press
Hardcover : 280 pages
Language: English
Dimensions: 5.8 x 8.7 x 0.9 inches