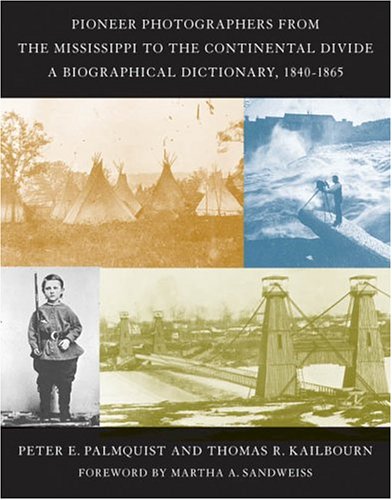 Pioneer Photographers from the Mississippi to the Continental Divide: A Biographical Dictionary, 1839-1865
by Peter E. Palmquist
Publisher's Description
This extraordinarily comprehensive, well-documented, biographical dictionary of some 1,500 photographers (and workers engaged in photographically related pursuits) active in western North America before 1865 is enriched by some 250 illustrations, many of them previously unpublished. The territory covered stretches from Alaska through Central America, and embraces all of the present-day states of the United States that fall, at least partially, west of the Continental Divide. The work is distinguished by the sheer number of entries, by the engaging quality of the biographical narratives that cover both the professional and personal lives (wherever possible) of the subjects, and by the careful, detailed documentation. It will be an indispensable reference work for historians, libraries, institutions with collections of early western photographs, and many enthusiasts and collectors in the field. In addition to photographers, the book includes retouchers, printers, manufacturers and sellers of photographic instruments and stock, publishers, lithographers, and engravers. Since western photographs often figured prominently in the creation of moving panoramas and popular optical amusements such as dioramas and magic lantern shows, the people behind those exhibitions are also covered. Far from being simply a reference tool, this book provides a rich trove of fascinating reading with a colorful cast of characters, including: Epifania de Guadalupe Vallejo, a teenaged Mexican girl who was the earliest known daguerrotypist on the West Coast; John Charles Frémont, who attempted to photograph the Rocky Mountains in 1842; John Wesley Jones, whose adventures while photographing and sketching the California Trail included the indignity of being stripped of his clothes by Crow Indians; and the eccentric Frederick Coombs, an accomplished photographer who was convinced he was the reincarnation of George Washington.
ISBN: 0804740577
Publisher: Stanford University Press
Hardcover : 768 pages
Language: English
Dimensions: 8.6 x 11 x 1.8 inches