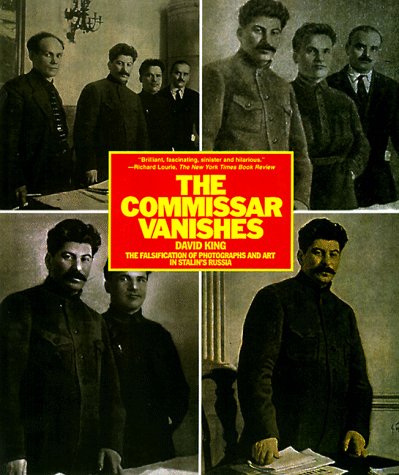 The Commissar Vanishes: The Falsification of Photographs and Art in Stalin's Russia
by David King
Publisher's Description
The long acknowledged occurence of Soviet photographic falsification, a tool of historical re-engineering, is documented here in this fascinating, well designed collection. A poginant testament to the tragedies of the Soviet experiment.
Amazon.com Review
In Stalinist Russia, it was commonplace for Soviet history to be rewritten with inconvenient participants removed--often men or women who had aided the Communist Revolution in the early days and then had somehow fallen afoul of Stalin himself. In The Commissar Vanishes, English art historian David King assembles an impressive body of photographs and artwork that shows the process whereby a hero could overnight be made into villain. "The physical eradication of Stalin's political opponents at the hands of the secret police was swiftly followed by their obliteration from all forms of pictorial existence," King rightly notes: in one noteworthy sequence reproduced on the cover, a photograph of Stalin with three revolutionary leaders is airbrushed and cropped and clipped until, one by one, those leaders disappear and only Stalin is left--conveying the message that Stalin carried the Russian Revolution by himself. Another photograph from the 1920s depicts a meeting of dozens of trade-union and Bolshevik leaders; by the late 1930s, all but a handful of them had been murdered at Stalin's orders. King's work restores some of these men and women to history and illustrates the essential inhumanity of totalitarian thought.
ISBN: 080505295X
Publisher: Holt Paperbacks
Paperback : 192 pages
Language: English