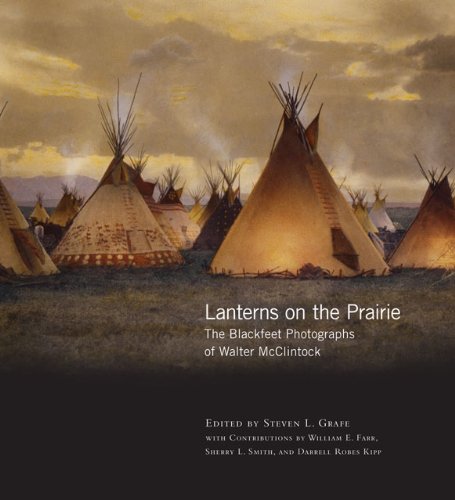 Lanterns on the Prairie: The Blackfeet Photographs of Walter McClintock (Western Legacies Series)
by Steven L. Grafe
Publisher's Description
In 1896, a young easterner named Walter McClintock arrived on the Blackfeet Indian Reservation. A forest survey had brought him to Montana, but a chance encounter with a part-Blackfeet scout led him instead to a career as a chronicler of Plains Indian life. McClintock is now well known as the author of two books about his experiences among the Blackfeet, but only a few of his photographs have ever been published. This volume features biographical and interpretive essays about McClintock’s life and work and presents more than one hundred of his little-known images.

Many of McClintock’s photos were eventually reproduced as colored lantern slides. One set of signature views contained numerous brightly lit tepees, rendered so that the great circular Blackfeet encampment “looked like an enormous group of coloured Japanese lanterns.” His pictures, the photographer claimed, “were not posed” but were instead “of real life.” In truth, McClintock’s photographs captured the attire and activities of the Blackfeet during the few weeks each year when they actively celebrated their old ways. Rather than recording day-to-day reservation life, they instead revealed the photographer’s own romantic ideals and nostalgic longing.

Lanterns on the Prairie explores the motivations of the players in McClintock’s story and the historic context of his engagement with the Blackfeet. The photographs themselves provide an irreplaceable visual record of the Blackfeet during a pivotal period in their history.
ISBN: 0806140224
Publisher: University of Oklahoma Press
Hardcover : 336 pages
Language: English
Dimensions: 8.4 x 11.2 x 1.3 inches