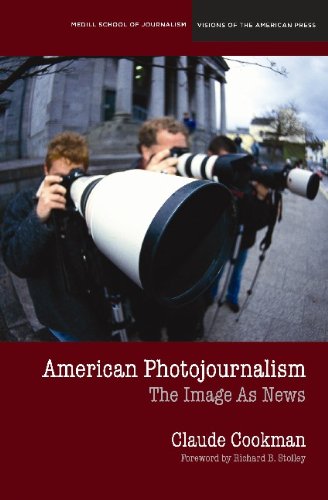 American Photojournalism: Motivations and Meanings (Medill School of Journalism Visions of the American Press)
by Richard B. Stolley
Publisher's Description
The traditional approach to studying American photojournalism explains the what and who of photojournalism - what events and developments occurred, what no-table images were taken, and who took them. Without neglecting those concerns, American Photojournalism emphasizes the why. It explains how contemporary photojournalism is grounded in three large ideas: the desire to witness and record historical events and important people, the belief in photography's power to advance social justice, and the embrace of a universal humanism. Cookman argues that contemporary photojournalists are strongly influenced by these three ideas, and that these ideas have become the central tenets of the profession.
ISBN: 0810123584
Publisher: Northwestern University Press
Paperback : 360 pages
Language: English
Dimensions: 5.2 x 7.9 x 1 inches