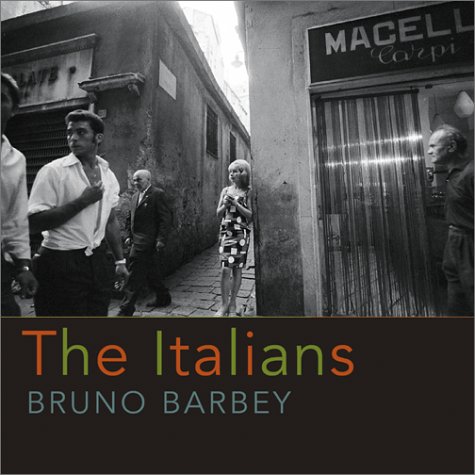 In the early 1960s, internationally acclaimed photographer Bruno Barbey sought to capture with his camera the spirit of Italy. Here, his endearing modern commedia dell'arte of beggars, priests, nuns, carobinieri, prostitutes, and mafiosi- archetypal figures whose exotic charms helped to make the films of Pasolini, Visconti, and Fellini so popular- join with the subtle pen of best-selling novelist and essayist Tahar Ben Jelloun to reveal the essence of Italy in that period. The result is an evocative word-and-picture portrayal of the Italians.

Bruno Barbey is an award- winning photographer whose work has appeared in Time, Life, National Geographic, and many other international magazines, and is in the collections of numerous museums. He divides his time between France and Morocco.Tahar Ben lelloun has published 10 novels, four books of poetry, and three works of nonfiction. His novel The Sacred Night won the Prix Goncourt, and his book Racism Explained to My Daughter has been translated into 15 languages and has sold over 300,000 copies. A native Moroccan, he lives in France.
ISBN: 0810905582
Publisher: Harry N. Abrams
Hardcover : 120 pages
Language: English
Dimensions: 11.4 x 11.3 x 0.7 inches