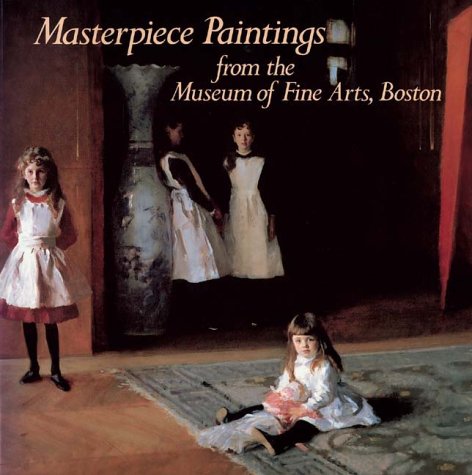 Masterpiece Paintings: From the Museum of Fine Arts, Boston
by Peter C. Sutton
Publisher's Description
The Boston MFA's collection of nearly 4,000 American and European paintings reflects the particular interests of Boston collectors over the years; it is thus particularly rich with early American portraits, with work by local artists Sargent and Homer, and with French painting of the Barbizon and Impressionist schools. These, as well as outstanding works by Warhol, Picasso, and Morris Louis are included within the scope of this fine selective sampler of the Museum of Fine Arts' collection. 125 paintings are reproduced, accompanied by individual commentary by members of the museum's curatorial staff.
Amazon.com Review
Affluent Boston was among the first American cities to establish a museum of fine arts, in 1870. By 1888, an observer was describing the enthusiasm with which self-confident Boston families were buying the works of "those mad outlaws, the Impressionists." Such early acquisitions form the basis of the MFA Boston's superlative collection, which could never be amassed today; the museum owns 38 works by Monet, for example, the largest group of Monets outside Paris. Masterpiece Paintings from the Museum of Fine Arts, Boston presents 125 of the museum's finest treasures. Beginning with a crucifixion of 1310 by Duccio, the first great artist of the Italian Renaissance, they exemplify the different schools and styles of Western painting. The works are grouped by country rather than chronologically, the largest European section being French, from a delightful Watteau garden party to the huge Gaugin allegory Where Do We Come From? Well-loved icons such as Renoir's Dance at Bougival and Sargent's The Daughters of Edward Darley Boit shine among lesser-known gems like a mysterious landscape by the Danish painter Holm. The short essays by the MFA's curators that describe each painting are succinct and enlightening. Issued to celebrate the refurbishing of a new wing, Masterpiece Paintings was first published in 1986; this is why the final section, titled "Modern Paintings," appears rather charmingly dated. So wide is the range and so high the quality of the paintings that the book forms a surprisingly complete and very enjoyable introduction to Western art history. --John Stevenson
ISBN: 0810914247
Publisher: Harry N. Abrams
Hardcover : 148 pages
Language: English