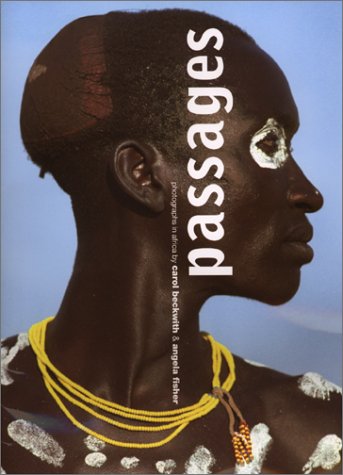 Passages: Photographs in Africa
by Carol Beckwith
Publisher's Description
This abbreviated paperback edition of the monumental, 2-volume African Ceremonies is oversized and contains some of the most fabulous images of various tribal rituals, from birth, to marriage, to death. An affordable book that is both educational in content and exciting to view.
Amazon.com Review
Placing her hands gently on either side of her daughter's face, a Himba woman rolls down the thick brown coil of her ceremonial ekori headdress. Eyes closed in the darkness of their hut in northwestern Namibia, both mother and daughter register the gravity of this moment, shortly before the girl's wedding. The headdress insures that she looks only into the future that awaits her as a married woman and not grieve over leaving her family.

During courtship season in southwestern Ethiopia, a lanky Surma youth whose own body is covered with an intricate pattern from biceps to thighs uses all 10 fingers to drag wavy lines of white pigment over the belly of another boy scowling with concentration.

Intimate moments like these, sensitively captured in Passages by veteran photographers Carol Beckwith and Angela Fisher, give Westerners an unusual feeling of kinship with rites of passage among African peoples in different parts of the continent. Even large-scale ritual scenes have a striking immediacy and a refreshing straightforwardness that emphasizes the human, rather than the exotic. These images are the result of long periods of contact between the photographers and their subjects, whose traditional celebrations offer only a few glimpses of the inroads of contemporary culture (T-shirts worn by men watching a funeral parade in Ghana, a Tuareg nomad's wire-rimmed sunglasses).

The 89 memorable images in this large-format paperback were selected from the 850 color photographs in the photographers' popular two-volume African Ceremonies. (They are also on view at the Brooklyn Museum of Art in New York through September 24, 2000.) --Cathy Curtis