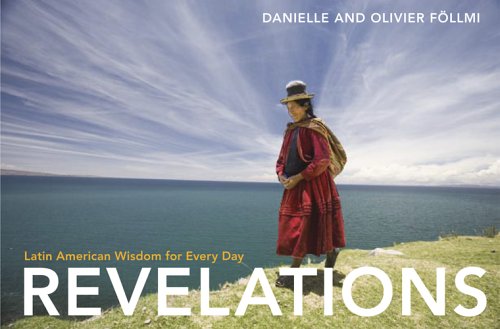 Revelations: Latin American Wisdom for Every Day (Offerings for Humanity)
by Danielle Föllmi
Publisher's Description
A cradle of Nobel Prize winners and a font of ancient wisdom, Latin America provides a wealth of sublime source material for the husband-and-wife creative team of Danielle and Olivier Föllmi. In the latest installment in their Offerings for Humanity series, the authors draw nuggets of written wisdom from the Andean plains to the Mexican desert. Set against the stunning visual backdrop of 365 photographs, taken all across the continent by Olivier, these quotations come from both world-renowned Latin American writers (including Pablo Neruda, Octavio Paz, and Carlos Fuentes) and traditional Indian spiritual teachings, demonstrating the subtle interweaving of ancestral belief and contemporary thought in one of the world's most intellectually fertile regions.