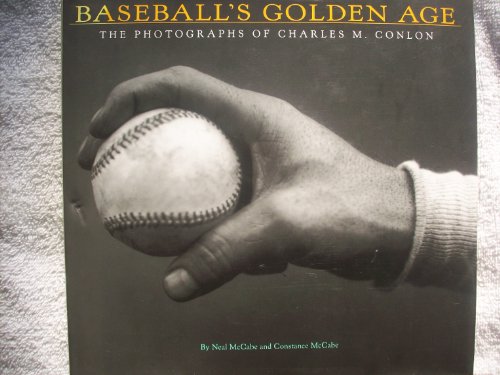 Baseball's Golden Age: The Photographs of Charles M Conlon
by Constance McCabe
Publisher's Description
Between 1904 and 1942 Charles M. Conlon created some of baseball's most famous images though he has remained virtually unknown. His work is collected here for the first time accompanied by stories and trivia from authors Neal McCabe and Constance McCabe.
Amazon.com Review
He was called "The Baseball Photographer," the man who put his camera away after the World Series and didn't unpack it again until Opening Day, but Conlon's work is not that simple. Though he had no artistic pretense, his images are certainly works of art, and if his subject, on the surface, was the "National Pastime," his focus was really on capturing depth of character; his characters just happened to be ballplayers. Conlon's stark, vivid, black-and-white photographs caught an era that spanned the turn of the century to the second World War, and some of the moments he froze remain breathtakingly stunning: the sad eyes of Babe Ruth in deep close-up, the hope in the smile of a rookie Lou Gehrig, the dignity of Walter Johnson, the impishness of Casey Stengel, the burdens of Honus Wagner, the arrogance of Nap Lajoie and Tris Speaker, and the concentration of Christy Mathewson. This is a magnificent collection, one capable of superimposing the past onto the present; it is visually arresting--and alluring--like the game itself. --Jeff Silverman
ISBN: 0810931303
Publisher: Abrams
Hardcover : 196 pages
Language: English