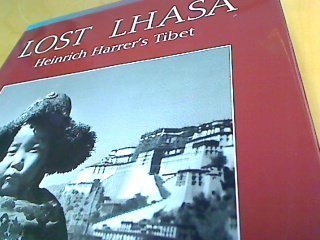 Lost Lhasa: Heinrich Harrer's Tibet
by Heinrich Harrer
Publisher's Description
Amazon.com Review
In the 1940s, Austrian mountain climber Heinrich Harrer escaped from a British internment camp in India and walked across the Himalayas. He limped into Lhasa two years later, and spent five years there as an honorary Tibetan. He kept diaries, bartered for an old Leica camera, and took thousands of pictures. Then in 1950 the Chinese invaded Tibet and Harrer fled. Seven Years in Tibet tells that story, but Harrer wanted to do more to raise international awareness. The result is Lost Lhasa, a collection of hundreds of previously unpublished intimate photographs of the Lhasa that used to be. With an explanatory text written in the same unpretentious prose that made Seven Years so popular, this paean to the Lhasa Harrer knew is beautiful and irreplaceable.
ISBN: 0810935600
Publisher: Harry N Abrams
Hardcover : 224 pages
Language: English