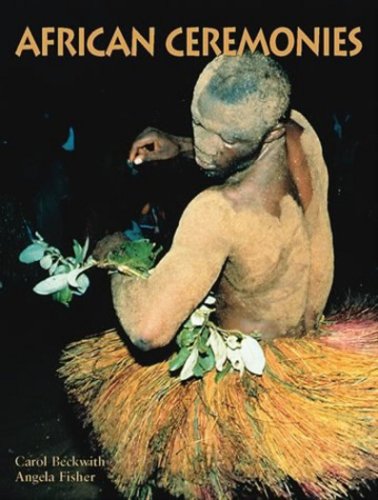 African Ceremonies
by Carol Beckwith
Publisher's Description
A massive 2 volume reissue of the classic African Ceremonies, housed in a cloth slipcase, and abundantly illustrated. Authors Beckwith and Fisher travelled extensively during their research for this monumental resource book, covering ceremonies and rites that relate to all aspects of life--from birth and initiation to death and burial.
Amazon.com Review
By a recent count, the continent of Africa comprises some 1,300 cultures. Some of them number millions of people, some only a few families; some are thriving, while others are in danger of disappearing, the victims of acculturation or, in extreme cases, of genocide. This diversity--and the dangers to it--is little known outside Africa. Photographers Carol Beckwith and Angela Fisher highlight both matters in African Ceremonies, an extraordinary two-volume collection of some 850 full-color images. The two artists have traveled to almost all the continent's 53 countries in the last three decades, documenting traditional tribal life in earlier books and articles for National Geographic, among other publications. Here they focus on the religious customs of several dozen peoples, combining stunning images with well-written essays to illustrate the enduring power of traditional beliefs.

Among the book's finest moments are a record of the Fulani cattle crossing, when for 10 days young males drive their herds across the wide Niger River to receive gifts from their grateful compatriots; a sequence showing a healing ceremony of the Himba people of Namibia and Angola, whose "wild women," possessed by lion spirits, are riveting actors on the page; and a remarkable series of photographs of Wodaabe courtship dancers, who compete to attract wives by charming them with exaggerated smiles and the skilled use of cosmetics. The authors note that, as women, they entered places men never could--and as foreigners, they were also often welcomed as "honorary males" and allowed to witness male-only ceremonies. Many of these rites are in danger of extinction as old ways are forgotten and in some cases suppressed. Beckwith and Fisher have captured them before it's too late. Beautifully designed and manufactured, African Ceremonies makes a fine companion to Henry Louis Gates Jr.'s Wonders of the African World, and invites leisurely reading--and constant revisiting. --Gregory McNamee