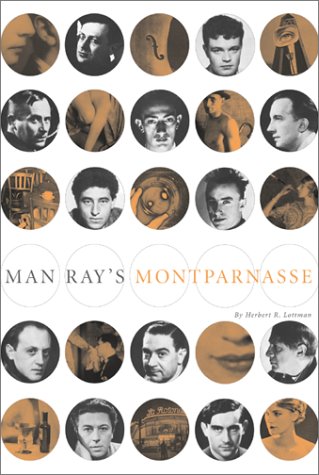 Man Ray's Montparnasse
by Herbert R. Lottman
Publisher's Description
Amazon.com Review
The Paris dada manifesto of 1921 "Dada Overthrows Everything" posed a dare to posterity: "What does Dada do? 50 francs reward for anyone who finds the way to explain us." Cultural historian Herbert Lottman finds a great way to explain dada: by focusing on its court photographer, Man Ray. Man Ray's Montparnasse brings you into the salons of Peggy Guggenheim and Gertrude Stein, and gives context to his dazzling photos: his naked mistress Kiki impersonating a violin; Duchamp impersonating a woman named Rrose Selavy (pronounced "c'est la vie"); Picasso as a toreador; and Proust on his deathbed, asleep at last, seemingly at peace and in some sort of reverie.

If one man's life could sum up the explosively creative international arts enclave Montparnasse in Paris between the wars, doubtless it would be Man Ray. Who else crossed paths with Hemingway, Mayakovski, Calder, James Joyce, T.S. Eliot, Atget, Satie, Cocteau, the battling bohemians André Breton and Tristan Tzara, and Arno Breker, who wound up as Hitler's favorite sculptor? It was a tumultuously innovative time. The antiwar Swiss loathed the elitist French dadaists; dadaists quarreled with surrealists. Breton broke a writer's arm with his cane because he badmouthed Picasso, Duchamp, and Gide. When Malcolm Cowley punched out a reactionary restaurateur, it was a great career move--his fame spurred his nascent literary career. Apollinaire warned young dada friends against Cocteau ("Don't trust Cocteau! He's a cheat and a chameleon!"), because he was a darling of high society. Eluard said the surrealists would "shoot him down like a stinking animal."

What made Man Ray an instant insider was his skill with the camera and his refusal to join the culture wars. "My neutral position was invaluable to all," he said. "I became an official recorder of events and personalities." "He was like the kid on the block with the guitar invited to everyone's party," writes Lottman. "He lived a double life, dressing for dinner in society, then reassuming a bohemian posture for life among the writers and painters."

Lottman's book is delightful, a quick read that makes legendary names in the history of art come alive as wildly misbehaving young people. When Henry Miller would drunkenly harangue a café, he earned a catcall: "Why don't you write a book?" Reading Lottman, you get a vivid sense of how the overlapping lives in that astounding time and place erupted in art. It's a privilege to be invited to such a historic party. --Victoria Ellison