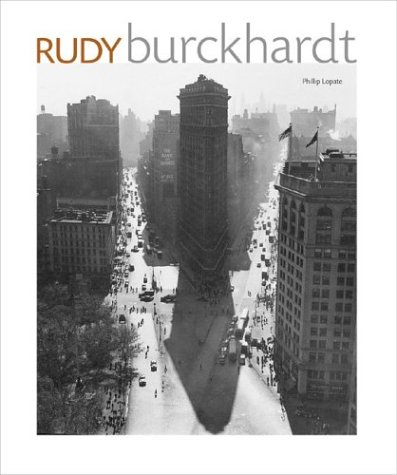 Rudy Burckhardt
by Phillip Lopate
Publisher's Description
Rudolph (Rudy) Burckhardt (1914-1999) was born in Basel, Switzerland, and immigrated to the United States in 1935, hoping to forge a career in photography. By the 1940s, he had begun to create a series of now-classic photographs of New York, which uniquely capture the energy and chaotic beauty of the city. Burckhardt soon became well-known in New York art circles, and began to photograph the great New York artists of the time, creating legendary portraits of icons like de Kooning and Pollock. Gradually, he became an important cultural force in his own right, not only as a photographer, but also as a maker of underground films, and, later in life, as a painter. This book is the first comprehensive monograph on Burckhardt's photographs. It includes not only his New York street scenes and his artists' portraits, but also his views of European cities, studies of children and the female nude, and views of the natural world. The range and brilliance of Burckhardt's work have only begun to become known outside the inner circle of his creative associates. This book will help redress that lack of recognition-it is a feast for the eyes of anyone who loves good photography.
ISBN: 0810943476
Publisher: Harry N. Abrams
Hardcover : 224 pages
Language: English