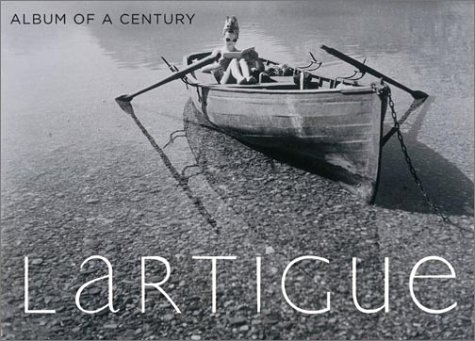 Lartigue: Album of a Century
by Quentin Bajac
Publisher's Description
Jacques Henri Lartigue (1894-1986) took his first photograph using his father's camera when he was six years old, and thus precociously began to create what would become an enduring record of 20th-century French life. Lartigue's charming images depict the intimacies of family, the style and panache of the Belle Epoque and the Parisian haut monde, the novelty of aviation and motoring in their infancy, and the vagaries of street life. Arranged into large albums, his several thousand photographs form a visual diary, as well as one of the major achievements of modern photography. As Lartigue approached his 80th birthday, he donated his entire collection of albums, prints, and negatives to the French State. This beautiful book, the most comprehensive ever published on the artist, reproduces facsimile pages from the albums- ranging from the earliest family heirlooms to the last photographs he created before his death-and includes six essays about various aspects of his art. Produced to accompany a major retrospective of Lartigue's work that will open at the Centre Pompidou in Paris and later travel to the United States, the book brings new attention to one of the great masters of photography.
ISBN: 0810946203
Publisher: Abrams
Hardcover : 400 pages
Language: English