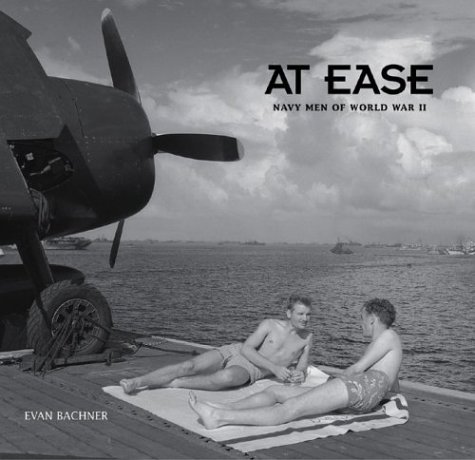 At Ease: Navy Men of World War II
by Wayne Miller
Publisher's Description
In the years following World War II, images of comradeship, particularly of men being physically close, largely disappeared from the public record. But, as these stunning photographs attest, ordinary American men in the extraordinary circumstances of World War II were affectionate, winsome, and playful, disarmingly innocent in a time of cataclysmic peril. Led by photography giant Captain Edward J. Steichen, the U.S. Naval Aviation Photographic Unit was organized during the war to record the daily experiences of Navy men all over the world and provide newspapers and magazines with images to promote the American cause. The unit's photographers, which included Wayne Miller, Horace Bristol, Victor Jorgensen, and Barrett Gallagher, took thousands of pictures of soldiers as they relaxed, trained, prepared for the next battle, and waited. This book brings together more than 150 of those photographs, culled from the National Archives, including many that have never before been published. Whereas World War II imagery tends to be dominated by combat photography and monumental depictions of weaponry, these photographs offer a rare, intimate look at the Navy men themselves.
ISBN: 0810948052
Publisher: Harry N. Abrams
Hardcover : 160 pages
Language: English
Dimensions: 11.1 x 10.6 x 0.8 inches