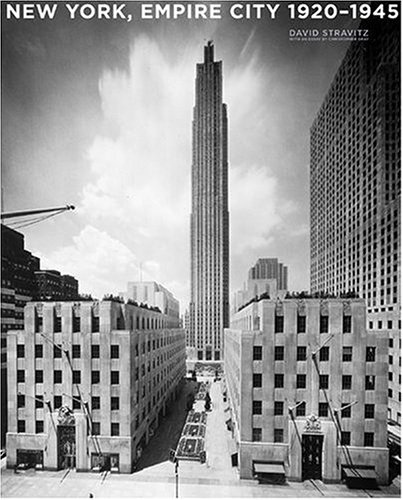 New York, Empire City: 1920-1945
by David Stravitz
Publisher's Description
New York between the wars: the city of Babe Ruth, Checker cabs, and Zelda Fitzgerald's infamous dip in the fountain at the Plaza Hotel. That is the city that comes gloriously to life in this fascinating collection of 100 historical photographs of New York's notable streetscapes and landmarks. Discovered serendipitously by author David Stravitz when he was on a hunt for used camera equipment, these rare photographs of the city are accompanied here by informative captions and an insightful essay by architectural historian Christopher Gray. Not only are these photographs being published for the first time, but the clarity and detail of the images, taken with a large-format camera, are astonishing. One can read the signage on the sides of buildings, examine the items in store windows, and see how people on the streets and sidewalks are dressed. From Trinity Church to Harlem, from Coney Island to Yankee Stadium, these images transport the reader into the heart of a vanished era, when men wore fedoras and the Empire City sparkled with promise.
ISBN: 0810950111
Publisher: Harry N. Abrams
Hardcover : 160 pages
Language: English
Dimensions: 9.7 x 11.8 x 0.9 inches