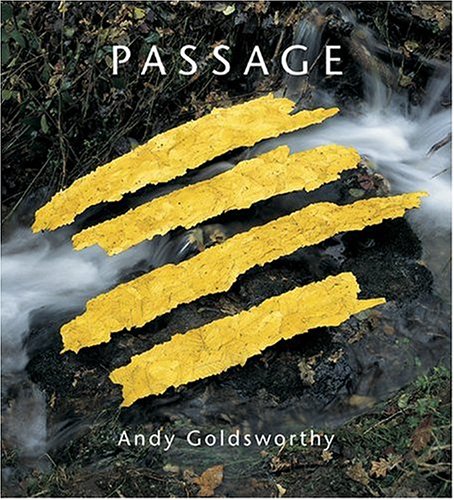 Passage
by Andy Goldsworthy
Publisher's Description
Andy Goldsworthy's 'Passage focuses on the journeys that people, rivers, landscapes, and even stones take through space and time. A cairn made by the renowned sculptor in the Scottish village where he lives reveals the influence that his work close to home has on projects he creates elsewhere. A series involving elm trees, from glowing yellow leaves to dead branches, exemplifies his work's vigorous beauty as well as its association with death and decay. Creations on the beach and in rivers explore the passage of time, while a white chalk path investigates the passing from day into night. 'Passage also includes the Garden of Stones, a Holocaust memorial at the Museum of Jewish Heritage in New York, where the artist planted 18 oak trees through holes in hollowed-out, earth-filled boulders. Documenting these and other recent works, this beautiful book is an eloquent testament to Goldsworthy's determination to deepen his understanding of the world around him, and his relationship with it, through his art.
Amazon.com Review
To achieve the quiet beauty of his art, Andy Goldsworthy spends long hours in rough weather, engaged in a tug-of-war with nature. He wrestles heavy stones on top of one another to form tall, egg-shaped landmarks known as cairns. He painstakingly covers fallen logs with bright golden bands of Dutch elm leaves—a last hurrah for a proud species decimated by disease. He pulverizes white chalk to lay a long, wandering path in the woods that gleams in the moonlight. Works like these are as much about the transience of life as they are about a sense of place and the pleasures of color, light and form. In Passage, the British artist's latest book, he once again provides diary excerpts that chronicle his daily successes and failures. The lush color photographs he takes to document peak moments of the birth, glory and decay of his art are as beautiful as ever. Unlike the other books, however, Passage--which begins in 2000 and darts back and forth over the next few years--is shadowed by a more urgent sense of mortality. Goldworthy's recently deceased father is in his thoughts, and a major project he tackles is the memorial Garden of Stones for the Museum of Jewish Heritage in New York. The garden's giant boulders pose many difficulties--finding the right ones, acquiring them, moving them, experimenting with cutting processes and coping with the elderly stonecutter's frequent tantrums. Hollowed out, the stones will be filled with trowels of earth (a ritual recalling burial) and tiny oak saplings, symbolic of life. "The partnership between tree and stone will be stronger for the tree having grown from the stone, rather than being stuck into it," Goldsworthy writes in his straightforward style. (An essay about this project by the historian Simon Schama, previously published in The New Yorker, is one of several pieces by other writers included in the book.) Once again, Goldsworthy succeeds in showing how seemingly simple ideas and actions can deeply engage both natural forces and human emotions. —Cathy Curtis
ISBN: 0810955865
Publisher: Harry N. Abrams
Hardcover : 168 pages
Language: English
Dimensions: 10.4 x 11.1 x 0.9 inches