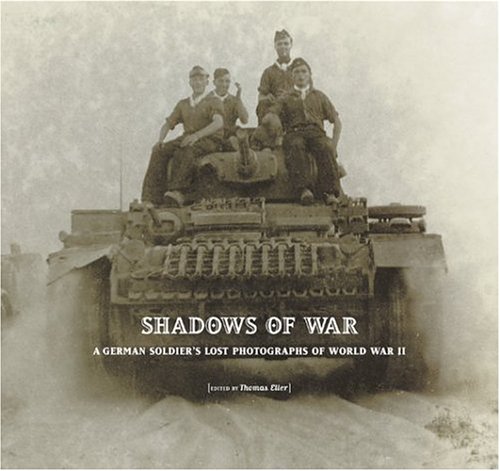 Shadows of War: A German Soldier's Lost Photographs of World War II
by Petra Bopp
Publisher's Description
'Shadows of War presents an astonishing collection of previously unpublished, unknown photographs of life at the front lines in the German war machine during World War II, taken by a common foot soldier. The work of a gifted amateur, Willi Rose's images present a powerful vision of a largely suppressed aspect of the war. These fractured glimpses of the world at war, from quotidian tasks and moments of leisure to scenes of death and destruction, reveal one man's experience of the epic flow of history. A miller in the years before World War II, Rose was drafted into the German army in October 1939 and served as a motorbike messenger on the front, first in France and then in Russia. He was wounded twice and was later captured by the Polish army, eventually returning home in June 1946. Throughout his military service, Rose sent home photographs that he took of the action, mostly along the Eastern Front. Discovered by his widow after his death, these images form a unique photographic document of one soldier's war.
ISBN: 0810955903
Publisher: Harry N. Abrams
Hardcover : 192 pages
Language: English
Dimensions: 9.4 x 10.1 x 0.9 inches