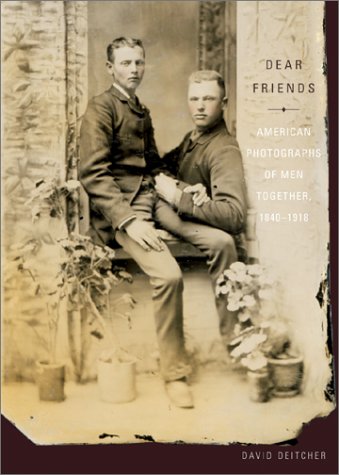 Dear Friends: American Photographs of Men Together, 1840-1918
by David Deitcher
Publisher's Description
A fascination study of male friendship in the 19th and early 20th century, as presented in photographs. Deitcher's text explores the meanings latent in these images, through a combination of social history, pictorial analysis, and personal reflection. He has written for Artforum, Art in America, and other periodicals.
Amazon.com Review
Dear Friends: American Photographs of Men Together, 1840-1918 collects more than 100 portraits--from daguerreotypes to cartes des visites and early photographic postcards--depicting affectionate male friendships whose precise nature, whether platonic or sexual, will never be known. Editor David Deitcher, who teaches art and critical theory at the Cooper Union, reflects on the history of these images and their possible significance. In the late Victorian period, he notes, men commonly established intimate, passionate friendships with other men, and often "posed for photographers holding hands, entwining limbs, or resting in the shelter of each other's accommodating bodies, innocent of the suspicion that such behavior would later arouse." These photographs have long been collected by gay men, for whom they are vehicles of longing "for the self-validation that comes from having a history to refer to; longing for a comforting sense of connection with others--past as well as present--whose experience mirrors one's own." Nevertheless, Deitcher reminds readers, because almost all the subjects of these photographs are anonymous, "they are powerless to communicate anything more than the following: This is how these men looked on that day when they sat for the photographer." But what these photographs prove is ultimately far less interesting or engaging than what they are: tender, funny, strange relics of a time when public expressions of love between men were freer and more natural than they are in our own ostensibly more liberated age. --Michael Joseph Gross
ISBN: 0810957124
Publisher: ABRAMS
Hardcover : 160 pages
Language: English