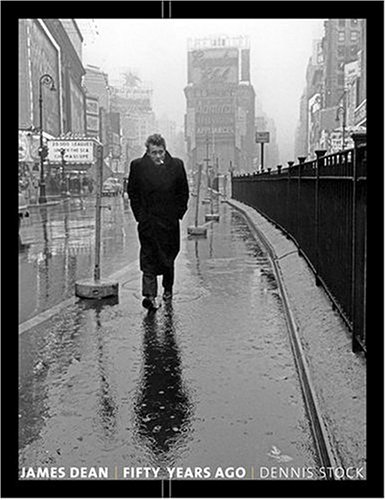 James Dean: Fifty Years Ago
by Dennis Stock
Publisher's Description
Like a restless ghost, James Dean (1921–1955) continues to haunt us. Though he died nearly 50 years ago, the enigmatic star of East of Eden, Rebel without a Cause, and Giant still symbolizes the mystery and torment of adolescence—an image that his sudden, violent death fixed forever in the public mind.

Magnum photographer Dennis Stock met Dean in Hollywood in 1954 and began to capture him on camera. Shot over a three-month period just as the young actor's star began to rise, these iconic photographs are the greatest pictures ever taken of Dean. Together with Stock's text and an introduction by Dean biographer Joe Hyams, the images provide an extraordinarily intimate view of the cult legend whose brooding good looks captivated fans by illuminating the troubled depths of his character. Published on the 50th anniversary of his death, this is the definitive photographic portrait of James Dean in both his professional and his private worlds—the real man behind the lingering legend.
ISBN: 0810959038
Publisher: Harry N. Abrams
Hardcover : 128 pages
Language: English
Dimensions: 10.4 x 13.3 x 0.8 inches