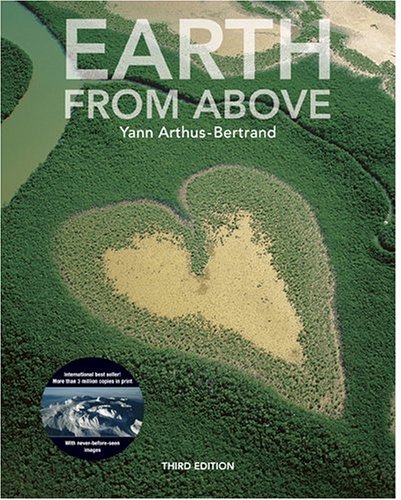 Earth from Above, Third Edition
by Yann Arthus-Bertrand
Publisher's Description
The result of a five-year airborne odyssey across five continents and 60 countries, Earth from Above is the most revealing and spectacular portrait of our world ever created. From a heart-shaped mangrove forest in New Caledonia to a flock of red ibises in Venezuela, from a caravan of camels in Mauritania to Mt. Everest and Mammoth Hot Springs, renowned aerial photographer Yann Arthus-Bertrand presents striking color images that put our home planet in a whole new perspective. Produced under the sponsorship of UNESCO, the book is also a documentary record of the state of the world's fragile environment.

This vibrant new edition of the internationally acclaimed original features an updated design and nearly 60 stunning new photographs. All new captions and the addition of authoritative new texts by experts in various environmental fields illuminate Arthus-Bertand's monumental achievement.
Amazon.com Review
Ecology, a science scarcely a century old, aims to give its practitioners an approach to understanding how whole natural systems--for example, watersheds, deserts, and estuaries--work. Few books translate this aim as well as Earth from Above, a stunning collection of photographs that affords its viewers a window into the world's workings. It is something of a commonplace, for instance, that the large-scale logging now being visited on the world's rainforests is causing untold damage to tropical ecosystems. In French photographer Yann Arthus-Bertrand's hands, this problem is translated from arid fact to alarming image, giving immediate meaning to the statistics that underlie today's environmental headlines; his photographs of the ruins of rural Madagascar, where forests are being cleared at a rate of 1,500 square kilometers (580 square miles) annually, are a sad case in point.

Arthus-Bertrand, working with the support of UNESCO, has wandered the globe to gather this collection of more than 200 photographs, presented in a folio format. The images are uniformly striking, whether of stalagmite-like fans of algae spreading into the Mediterranean Sea, farmers working their fields in northern India, or destroyed Iraqi tanks littering the deserts of Kuwait. The accompanying text, captions, and short essays by some of France's leading scientists and social critics lend specific depth to the images, which will cheer few readers--but that will shock, and educate, and, with luck, inspire closer attention to the world around us. --Gregory McNamee