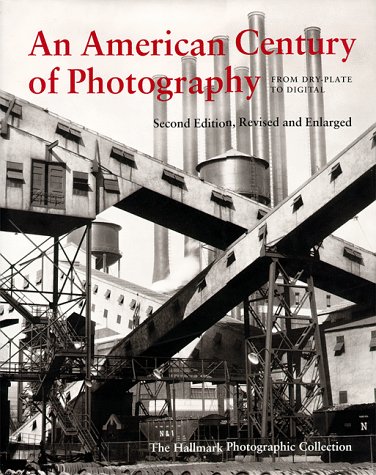 American Century of Photography
by Keith Davis
Amazon.com Review
In 1964 the Hallmark corporation established its photography collection--the first corporate collection of its kind--with the purchase of more than 100 prints by Harry Callahan. The company's acquisitive pace never slowed: they currently own about 4,000 prints. The scope of the work is dizzying--name a photographer, and you'll likely find an excellent example of his or her work here. Strand, Modotti, Hine, Arbus, Wegman, Mapplethorpe, and Mann are just a small number of the photographers who represent the breadth and depth of this group of images. The book itself is as colossal as its title would indicate. Keith Davis, the director of Hallmark's fine-art programs, has written a meaty if occasionally dry history of the medium to accompany and illuminate the nearly 500 photos. Most of the images, from Henry Cady's late-19th-century shots of his family to Irving Penn's Duke Ellington and Bruce Davidson's gang kids, are black and white. But Sandy Skoglund's surreal Fox Games and Larry Burrows's painful Reaching Out are skillfully reproduced to maintain their lush color saturation. Look for the collection at an exhibition that tours the Phillips Collection in Washington, D.C., the Seattle Art Museum, the Denver Art Museum, and other venues from 1999 to 2002. --Anna Baldwin
Publisher's Description
This new edition of Davis's already substantial--but out-of-print--anthology adds two hundred new photographs and 120 new photographers. The Hallmark Photographic Collection, begun in 1964, is distinguished both by the breadth of its perspective and by its exceptional quality. This catalogue is the most complete survey of uniquely American ideas, artists, and works in photography.
ISBN: 0810963787
Publisher: Harry N. Abrams
Hardcover : 608 pages
Language: English