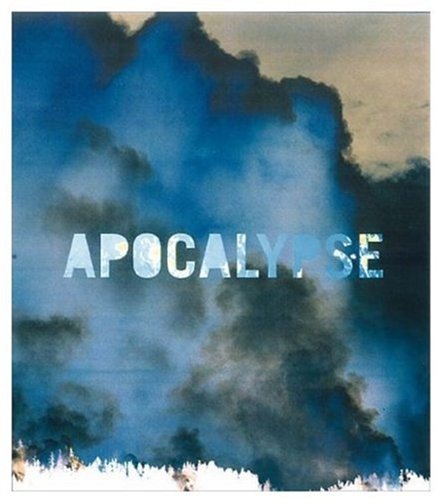 Apocalypse
by Norman Rosenthal
Publisher's Description
"In 1997, the Royal Academy's enormously successful 'Sensation' exhibition excited controversy and debate about contemporary art. In 2000, another internationally significant contemporary art show, 'Apocalypse', concentrates on themes inspired by the coming of the 21st century."-the publisher. This catalogue is softbound, but comes slipcased. The exhibition was sponsored by Eyestorm.
Amazon.com Review
The horror, the horror. Three years after Royal Academy Exhibition Secretary Norman Rosenthal organized the controversial "Sensation" exhibit comes the sequel, "Apocalypse." It takes as its philosophical starting point the Book of Revelation, though the subtitle exposes a compromising catch-all: "Beauty and Horror in Contemporary Art." The kitsch creations of Jeff Koons and Mariko Mori and the casual photography of Wolfgang Tillmans provide superficial beauty, while the most obvious horror is Hell, Jake and Dinos Chapman's truly apocalyptic sculpture comprising nine glass cases arranged in a swastika, containing 5,000 figurines of Nazis and their torturers indulging in unspeakable sadism. This Goyaesque vision of eternal return is the centerpiece of the exhibition, and rightly so. Collector Charles Saatchi's money was well spent. But, apart from the brutally understated paintings of Luc Tuymans, Rosenthal's evangelical vision creates an art theme park, from Gregor Schneider's claustrophobic cellarage, "a cathedral of erotic misery," or, more prosaically, a fairground haunted house through which one clambers, to Mori's dream machine and Darren Almond's Auschwitz bus stops. After such one-trick ponies, Maurizio Cattelan's blackly comic fallen pope, struck by a meteorite, proves welcome. Alive or dead, infallible or found out, the rich ambiguity goes to the crux of belief.

Rosenthal's attractive catalog for these memento mori from his 13 international Cassandras lends the exhibition invaluable context and strategy, especially given the apologia passing for notes on the gallery walls. Alongside a CV are photographs of other works by each artist, followed by stills of their apocalyptic exhibit. This can have a strange effect: Schneider's assemblage suddenly appears cinematic, while the films of Chris Cunningham (of Björk and Aphex Twin video fame) and Mike Kelley become necessarily photographic. And there is a typically overblown introductory essay by Rosenthal, which justifies his idiosyncratic curatorial conceit. Intended as a bifocal survey incorporating history and the postmillennial present, "Apocalypse" proves not so much a sensation as a curate's egg. --David Vincent, Amazon.co.uk