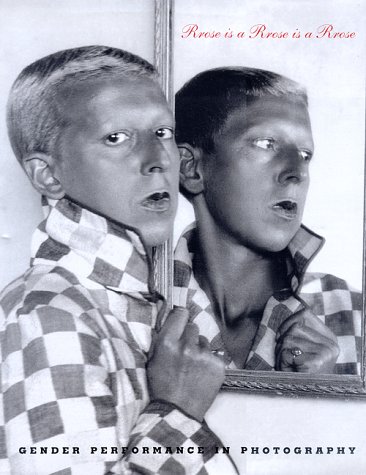 Rrose Is a Rrose Is a Rrose: Gender Performance in Photography
by Jennifer Blessing
Publisher's Description
Since the Surrealists Claude Cahun, Man Ray, Brassaï, and Duchamp, sexuality and identity have been central themes for photography. Starting with their work, this anthology, and the Guggenheim exhibition from which it is drawn, are the first to explore gender performance in photography.
Amazon.com Review
The title of this large, provocative book is a combination of two historical wordplays: Gertrude Stein's famous "Rose is a rose is a rose," and Marcel Duchamp's "Rrose Selavy," the name of his imaginary, female alter ego. Spoken, it sounds like "Eros, c'est la vie,"or "Eros, that's life."

The catalog of an exhibition at New York's Guggenheim Museum, Rrose is a Rrose is a Rrose is exquisitely, elegantly designed. It includes a wealth of pictures as well as six essays on issues such as surrealist ambiguity, the exhibitionist body art of the 1970s, "queer theory" and "queer reality," and the fluidity of gender identity. With the exception of some 20th-century images of rubber appendages or bound dolls, much of the material has an innocent charm. In one of Alice Austen's Victorian-era self-portraits, for example, she and two friends are dressed as men, with spats, hats, and fake moustaches. One has carefully balanced a walking stick to suggest a male member; the women are cracking up.

The volume also explores the prejudice surrounding the evolution of gender consciousness, and details the heroism of many artists devoted to tolerance, such as Claude Cahun, whom the Nazis sentenced to death. Rrose is a Rrose is a Rrose will not change minds, but it will broaden those already open to its subject.