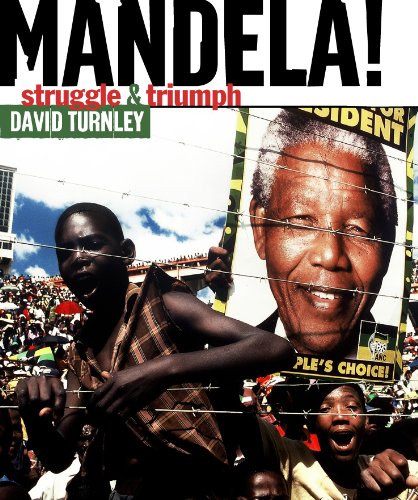 Mandela : Struggle and Triumph
by David Turnley
Publisher's Description
Nelson Mandela, an icon of the international struggle for freedom and equality, whose importance rivals that of Martin Luther King and Mahatma Gandhi, turns ninety in July 2008. Mandela spent twenty-seven years in prison for his opposition to the apartheid regime of his native South Africa. Released in 1990, he pursued a policy of reconciliation, steering his nation into the ranks of the world’s multi-racial democracies. He was elected president of South Africa in 1994.

Photographer David Turnley covered Mandela and South Africa for the world’s press, beginning in the 1980s. He witnessed the turbulence of the last violent years of apartheid, was there when Mandela was released from prison, campaigned with him during the presidential election, and sought out the significant people and places of his life. In Mandela: Struggle and Triumph, he tells in words and photographs the dramatic and emotional story of the most powerful movement for civil rights since the American civil rights movement, through the eyes of its legendary leader.
ISBN: 0810970929
Publisher: Abrams
Hardcover : 168 pages
Language: English
Dimensions: 10.2 x 11.8 x 0.7 inches