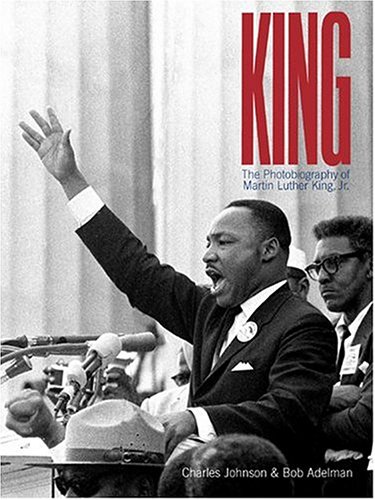 King: The Photobiography of Martin Luther King, Jr.
by Charles Johnson
Publisher's Description
More than a biography of one man, this book also presents a thorough and gripping history of the civil rights movement in 20th-century America.
Amazon.com Review
The legacy of Martin Luther King Jr. and the civil rights movement is well documented in prose, but for sheer emotional power, nothing can compare to the pictures from this era. It's a challenge for a writer's words to match the force of Bob Adelman's photographs in this book, but novelist and essayist Charles Johnson rises to the task in his treatment of King's life and death, as well as the heroic struggle of African Americans in the United States. Johnson, the author of Middle Passage (which won the 1990 National Book Award), offers an exceptional counterpoint to the stirring images with the depth and weight of his essays and captions. "How soon we forget that King was not only a civil rights activist," Johnson writes, "but also this country's preeminent moral philosopher, a spiritual aspirant, a father and a husband, and that these diverse roles--these multiple dimensions of his too brief life--were the foundations for his singular 'dream' that inspired millions worldwide."

Adelman intimately captures King's background, from his comfortable middle-class upbringing in Atlanta to the dashing figure he cuts with his wife, Coretta, to his steady ascendance as a forceful preacher thrust into prominence during the Montgomery bus boycott of 1955-56. We cringe at the sight of King being photographed as a criminal and at the horrific treatment many blacks endured by racist Southern police. The triumph of King's "I Have a Dream" speech, which he gave at the 1963 March on Washington, is beautifully detailed, along with his acceptance of the 1964 Nobel Peace Prize. We also see a weary King, weighed down by assassination attempts, harassment, inner-city riots, and the Vietnam War. Toward the end, King displays an eerie sense of calm in the photos taken just days before his death--particularly in an April 3 photo taken at the Mason Hall in Memphis the night before his murder, where he declared that he'd "been to the mountaintop." King's legacy is lovingly chronicled in this impressive book. --Eugene Holley Jr.