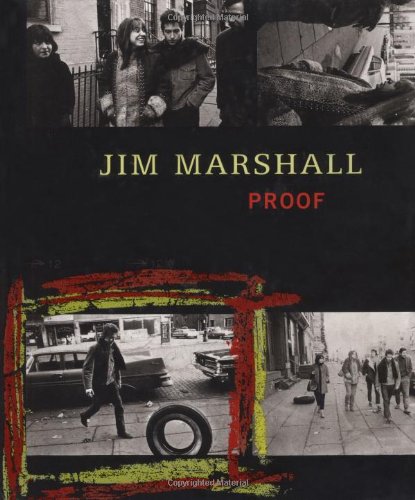 Jim Marshall: Proof
by Jim Marshall
Publisher's Description
JIMI HENDRIX (1967) This famous shot of Hendrix in his Sgt. Pepper jacket was actually taken at sound check Sunday afternoon before his historic performance at the Monterey Pop Festival. A few frames from Otis Redding's Saturday night finale start the roll. Marshall introduced himself to the guitarist and started taking pictures while standing alongside Hendrix on the stage, unwittingly documenting stage manager Al Kooper turning down Hendrix's suggestion that he play organ on 'Like a Rolling Stone.' 'Roll No. 4078—The Arm, frame number thirty-two,' said Marshall. 'These are my children.' JOHNNY CASH (1969) When Johnny Cash went to San Quentin Prison to record a live album, Marshall, who took the cover shot of Cash's previous At Folsom Prison, went with him again. At Q, Marshall caught another one of his classic 'finger' shots during sound check by saying to Cash 'Let's do a shot for the warden.' MILES DAVIS (1971) Davis saw photos of 'Trane that Marshall took and let Marshall into his world. Marshall made album-cover photos for the slippery jazz great, attended Hendrix's funeral with him, and followed him around town during a Fillmore West run, where he caught this shot of Davis with his guard down, working out at Newman's Gym. BOB DYLAN (1963) Marshall, Bob Dylan, Dylan's girlfriend Suze Rotolo, and Dave Van Ronk and his wife Teri were walking down Seventh Avenue in Greenwich Village, going to breakfast. Dylan spied a discarded tire and Marshall clicked off these frames with a morning haze filtering the light. The world-famous photograph could never have been created in a studio—another example of Marshall's ability to stop time.