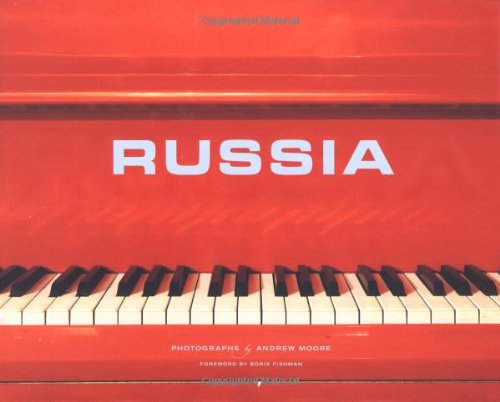 Russia: Beyond Utopia
by Andrew Moore
Publisher's Description
Even after the fall of the Iron Curtain, Russia remains a nation shrouded in mystery. The country's modern aesthetic includes vestiges of its past that combine and collide with its present, reflected in such unusual imagery as an ornate palace which now houses a hip-hop rehearsal studio, and the stained-glass windows of a church that immortalize the icons of the proletariat. Photographer Andrew Moore explores Russia's majestic beauty and paralyzing decay with striking honesty, often finding them in the same frame. Russia: Beyond Utopia is an intricate hybrid of modern Russia's unresolved past and uncertain present, revealing a country on the cusp of a new era.

Andrew Moore's works are represented in the collections of the George Eastman House International Museum of Photography and Film, the Whitney Museum of American Art, and the San Francisco Museum of Modern Art. Inside Havana was his first published monograph.