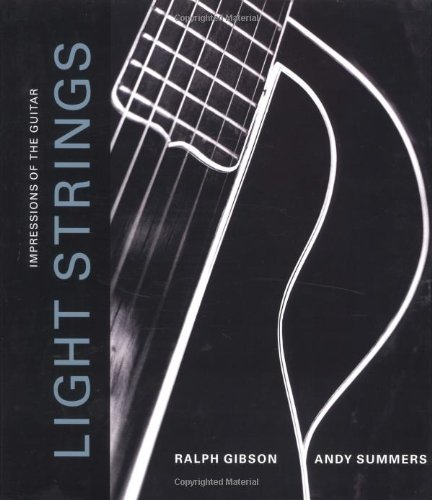 Light Strings: Impressions of the Guitar
by Ralph Gibson
Publisher's Description
The guitar is more than a musical instrument. It is an archetype. In homage, Light Strings brings together two masters of their craft: photographer Ralph Gibson and former guitarist for the Police, Andy Summers. Gibson's enigmatic and sensuously elegant photographs are the visual counterpart to Summers' lyrical history and thoughtful exploration of the instrument's features. Together they create a unique poetic meditation on the guitar. Both artists pay attention to the form of the guitar and its relationship to the body; its curves echo the human figure, not only requiring it to be cradled to play it, but inviting a study of its own sumptuous anatomy. With over one hundred alluring images that capture the graceful details of the instrument, Light Strings is the book for every guitar player. Ralph Gibson is a renowned photographer and photo book publisher, whose work is held in collections around the world. He lives in New York City. Andy Summers is a Rock and Roll Hall of Fame inductee whose latest solo album is Earth & Sky. He lives in Los Angeles.
ISBN: 0811843246
Publisher: Chronicle Books
Hardcover : 120 pages
Language: English