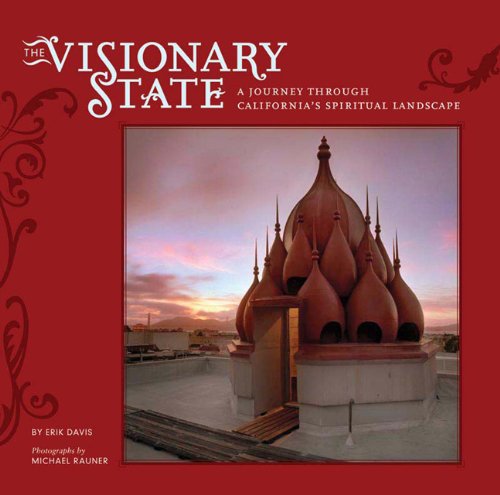 The Visionary State: A Journey Through California's Spiritual Landscape
by Michael Rauner
Publisher's Description
California has long been famous for its diversity, its eccentricity, and its prophetic influence on popular culture. The Golden State has also been an incredibly fertile climate for spiritual and religious movements, ranging from the venerable traditions transported to the rest of the West through its shores to freshly invented sects. Weaving together text and image, The Visionary State presents a visually enchanting and intellectually compelling exploration of this pastiche of faith, which ultimately represents a 'California consciousness.' Drawing together history and geography, architecture and poetry, the book puts California's alternative spirituality in a broad context, and helps to explain why its unconventional ways continue to influence people around the world.

Ranging from televangelism to Neopaganism, UFO cults to Zen bootcamps, acclaimed culture critic Erik Davis weaves together the threads of California's religious history into a strange and vivid tapestry. Michael Rauner's haunting, iconic photographs are seamlessly integrated throughout the volume, grounding its many stories in the places, buildings, and sacred sites that reflect California consciousness through landscape and architecture. Together Davis and Rauner map the peaks and faultlines that characterize the place that is both the nexus and far frontier of American religion.
ISBN: 0811848353
Publisher: Chronicle Books
Hardcover : 272 pages
Language: English
Dimensions: 9.8 x 9.8 x 1.3 inches