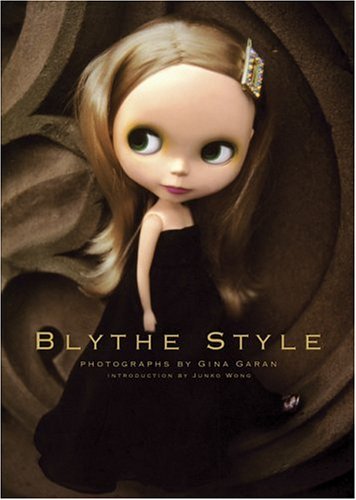 Blythe Style
by Gina Garan
Publisher's Description
International superstar and high fashion model Blythe has never let the fact that she is literally a doll slow her down. Rescued from toy box obscurity with the publication of Garan's first book, This Is Blythe (50,000 copies sold), the 12-inch tall diva has been celebrated in the front windows of Bloomingdales; on the cover of Women's Wear Daily; on VH1's 'I Love the '70s'; in People, the New York Times, and ad campaigns for Nordstrom, Sony, and trendy Japanese department stores. In Blythe Style, she shows off 100 to-die-for outfits created for her by top designers from around the world and photographed with colorful invention by Garan, including Gucci, Prada, Versace, Christian Dior, Dolce & Gabbana, John Galliano, Paul Smith, Issey Miyake, Vivienne Westwood, and dozens more, all for the sake of charity. Tres chic!

Gina Garan, a New York–based photographer and video producer, saw Blythe by chance and has been her constant companion ever since. Her photographs of Blythe have shown in London, Spain, Asia, and across the U.S.

Junko Wong is president of Cross World Connections, a Tokyo-based agency that has been pivotal in returning Blythe to the spotlight she deserves.

Blythe's eyes change color from green to blue to orange to pink at the pull of a string. Born in Cincinnati in 1972, she's a tireless world traveler who now divides her time between Tokyo and New York City.
ISBN: 0811851176
Publisher: Chronicle Books
Paperback : 160 pages
Language: English
Dimensions: 8.1 x 11.6 x 0 inches